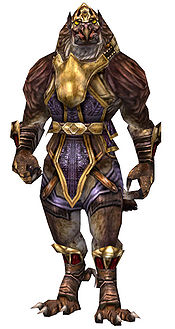 Tengu are a unique species of avian humanoids found in both Tyria and Cantha. Females are generally larger than males of the species, though their plumage is plainer, even drab. Tengu lost the ability of flight some time in the distant past, but can use their almost human hands to wield all manner of weapons—when they want to. Their talons make most weapons superfluous. Tengu hate cooked food, and most live on a diet of fresh, raw meat.

Tengu are a bipedal humanoid race with usually slim, partially hunched, bodies. Next to their beak are two short fangs. The females of their species have plainer plumage and are typically larger than males. Tengu prefer raw meat for their diet, and although avian, they lost their ability to fly in the distant past. In terms of appearance, there is a large amount of variance from individual to individual, on a par with (or possibly even more so than) the charr.

Although each tengu tribe have unique cultures, they all fervently uphold three basic virtues: honour, family, and history.

Canthan tengu of old believed in an afterlife, which they called the Sky Above the Sky. A sect of tengu were known to have guarded the Celestials during the Canthan Trials of Ascension, meaning defeating them was necessary to become Weh no Su, but their connection to the mainstream tengu belief system is unknown.

Most tengu have short, Japanese-style forenames, and clan names that can be seen as consisting of two parts. The first part tends to be descriptive somehow (e.g. bright, gold, true), and the second part often refers to an element of avian anatomy (e.g. crest, talon, claw). 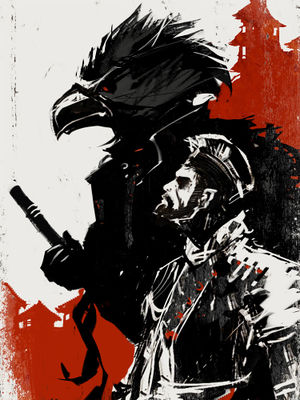 After the Jade Wind necessitated further human settlement of Shing Jea Island, the Sensali tribe massacred an entire village and, according to rumour, ate the corpses. War with their Angchu cousins was, for a time, narrowly averted through the shrewd efforts of Emperor Hanjai's personal ambassador and a wise, levelheaded Angchu chieftain in 880 AE, however it was not possible to prevent the Sensali from attacking, creating a hatred between the two tribes that was only surpassed by their hatred of the mountain yeti. When further human settlement of the island put Angchu hatchlings in contact with foreign diseases, the tengu were forced to kill their own young and they, too, joined the fight against the humans.

The Tengu Wars would rage for almost two centuries, and it was not until early in the reign of Emperor Kisu that it looked like peace may be a possibility. The Emperor's half-brother, Master Togo of Shing Jea Monastery, was called to the estate of War Minister Wona for a peace summit with the leaders of the Angchu and Sensali, among them Talon Silverwing, Gull Hookbeak, and Swift Honorclaw. The summit was a trap, however, intended to kill Togo and pin the blame on the tengu, creating the pretext for a genocide. Togo and Talon Silverwing managed to fight their way out and Wona was put down, but the damage to human-Sensali relations was permanent.

In 1071 AE, a formal peace with the Angchu was finally reached, bringing an official end to the Tengu Wars. The peace was commemorated annually as the Day of the Tengu, at least while the peace lasted.

Not long after, in 1080 AE, the Empire of the Dragon experienced a surge of nationalism in the wake of the return of Shiro, the Betrayer and his plague. After routing the Am Fah and Jade Brotherhood street gangs, the newly-formed Ministry of Purity turned their sights on the tengu that lived on the mainland, in Kaineng City. The conflict soon spilled over onto Shing Jea Island, and peace with the Angchu finally broke down when Ministry guards witnessed Ryun Grayfeather defending Tsumei Village against Sensali, believing them to be working together and killing Grayfeather.