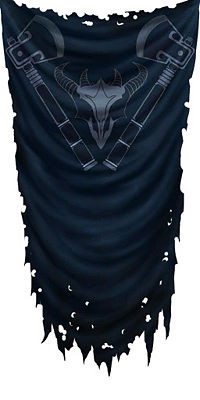 The Am Fah and the Jade Brotherhood are in a state of constant cold warfare, which sometimes spills out into the streets, along with a lot of blood. For hundreds of years, neither has been able to topple the other, and out of necessity the rivals have been known to cooperate during the occasional crackdowns on their activities. Were one gang or the other ever to gain the upper hand, the resulting trade monopoly could conceivably lead to a coup against the throne, so the emperor's personal agents help ensure that never happens.

The Am Fah are a gang of notorious villains who attack travelers at will around the Kaineng City. They are sworn enemies of the Jade Brotherhood. The Am Fah ranks consists mainly of rangers, monks, necromancers and assassins. Only Am Fah bosses may appear having other professions. There are four notorious members of the Am Fah: Chan the Dragon's Blood, Lou, of the Knives, Mina Shatter Storm, and Meynsang the Sadistic.

The Am Fah's guild hall is located in the Undercity. The leader of the Am Fah is still unknown.

A masked Am Fah Necromancer.