Zenmai learned the ways of silent assassination as a member of the Am Fah gang in Cantha. She broke with her criminal gang when that organization embraced the Canthan Plague as a "gift of the gods." Now she is mo zing - a traveling blade, a masterless assassin, selling her services to the highest bidder. She feels guilty for the disease that overtook her former brothers and sisters, but the one constant in her life has been change. In the growing darkness, she has the feeling that an old, familiar force is back, working from behind the scenes. She wants to confront whoever or whatever is ultimately responsible for the plague that stalked her land. 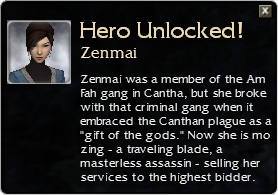 Complete the quest Chasing Zenmai, which can be obtained from Dinja in the Consulate Docks. Your account must be able to access both the Factions and Nightfall campaigns to recruit her in PvE.

During Redemption for the Lost[edit]

Zenmai starts with basic Am Fah armor, which is similar in appearance to Assassin Shing Jea armor but which has its own unique variations. Her armor has an armor rating of 55 to 70, depending on her level. Like all heroes, her headgear provides an additional +1 attribute bonus based on the rune applied to it.

During Chasing Zenmai, as an ally:

"To the Undercity! We must save those civilians before they are lost to the sewers... along with my pay."

"In Cantha, we bow very low to heroes and to emperors. That is the way I will bow to you."

During Redemption of the Lost:

"As an assassin, I believe that passing judgment on a mark is something that should never be done. But as a person, and more importantly, as a Canthan, I do not agree with how the Ministry of Purity has been producing its "results.""

"Istani. Always looking for the "bright side." There is no bright side. Koss is dead. Kormir is dead."

"Before you know your enemy's weaknesses, you must know your own."

"The Elders argue, they complain. They do not act. We must act for them."

"We have gathered our survivors, but to what end? We must get them home."

"The Sunspears remind me of my brothers and sisters of the Am Fah. Protect that. Fight for it. Never let it go."

"These elders close their minds and open their mouths."

"A man is as big as the things that make him angry. Think on that."

"Clear your mind. Prepare for the fight ahead."

"I have been practicing a new skill with Koss. Don't worry...I left him unharmed. Mostly."

"Keep your fear close. Bite down on it. Fear is the heart of an assassin's powers, both in giving, and in defying."

"Lead the way to Pogahn Passage. I will make sure we are not followed."

"Vabbi is completely undefendable [sic] from the south. If the Kournans want to attack, they will succeed."

"I wish I could shadow you to this party. Something about it bothers me. You will be careful, won't you...friend?"

"Prince Bokka the Magnificent. Tell me, do these Vabbi princes pay well?"

"Kehanni will surely have assassins after her. We are in great danger."

"I am prepared to stand and fight...but there are other ways."

"By Grenth. Goren dances like a tengu drunk with Dwarven ale."

"Libraries, theatres, merchants... Where are the warriors? Where is Vabbi's strength?"

"Those who attack the Temple of Lyssa deserve to have a thousand fire-beetles strewn over their flesh."

"The Grand Forum of Vabb in the Forum Highlands. Good. Varesh finally does something useful...kills all the politicans. Vabbi will be stronger for it."

"There is danger in the Garden of Seborhin. The shadows there speak of things even they cannot hide."

"A problem cannot be solved with the same consciousness that created it. Melonni needs our help to defeat her dreams."

For all the Centaurs complain of their slavery, I have yet to see them fight with us against Varesh. Freedom cannot be given, it is earned."

"Percieve[sic] yourself to be what you wish to become. Soon you will discover that you are right."

"If we are silent and swift, we can do this."

"I hear and I forget. I see and I remember. I do and I understand."

"To cross the Desolation will take resolve as well as courage. This is no simple journey; this is crossing the very maw of death."

"Torment does not frighten me. It is no different than any other hell I have seen: it is not Cantha."

"What begins in a surge of violent motion always ends in stillness. I do not fear the Margonites; I fear the chained beast that is their master."

"The obstacle is the path."

"When two tigers fight, one is maimed and one dies. There is no escape from the consequences of such a battle. That is why even a tiger must know caution."

"I will not pray. The gods were not with me when the plague struck Cantha. They did not intervene when the Am Fah destroyed themselves. This fight will be won by my hand, not Dwayna's."

"Shiro Tagachi! I am ashamed that any Canthan soul would serve Abaddon, but I should have expected nothing less from the one we Canthans call the Betrayer."

"Elona is not the only land you saved, hero. All the world would have fallen to Abaddon... if it had not been for you."

Quotes that are independent of the storyline:

"Disease and betrayal took my friends from me. It will not happen again. I promise you that."
"Before you know your enemy's weaknesses, you must know your own."
"Clear your mind. Prepare for the battle ahead."
"It is as much a waste of time to force a man to act as it is to force a rock to move uphill. There are better ways."
"Listen to my daggers sing. The song is one of balance: pain and mercy, death and life. Dancing to the music of death is the purpose of the assassin. And it is the only joy I have to remind me of my homeland."
"Nothing is truly evil. But some things bring a deep imbalance, and cause destruction. Like a plague, these things must be fought and destroyed before they damage the delicate construction of the world."
"Physical obstacles are easy to break. Mental ones... that's the trick, friend. Break all the bones you want, it's the mind that will stop you from succeeding. Every time."
"These Kournans remind me of the Am Fah back in Cantha. Killing without remorse. Moving without direction. Acting without understanding."

Quotes that are independent of the storyline:

"Can't you try harder? Make it a bit more... challenging?"
"Dance with me, for a moment of beauty before the inevitable end!"
"For the honor of Cantha!"
"Getting out of bed was your first mistake today, friend. Crossing my path will be your last."
"I know this dance. Let's quicken the beat."
"I will tell your lord you fought well."
"In the Emperor's name, I will not fail!"
"One mind. Any weapon."
"One, two, dead."
"Silent and deadly."
"Surrender or you will know pain beyond imagining!"
"The moment you moved, it was already too late."
"To hell with you, and tell Shiro I said hello."
"Why is my blade so short? It's long enough to reach your heart!"