Idealistic Runaway
"I signed on for the heroic songs and the praise. I did not sign on for the blood-sucking bugs."
Origin: Vabbi
Age: 18
Profession: Monk
Some adventurers are a little too eager to be heroes. Many have tried to guess which village or city Tahlkora ran away from, but Vabbi's a pretty big place. No doubt her home is far away from the horrors of war and the nightmarish abominations that stalk scorched wastelands. She certainly seems well-educated in the myths and lore of the land, but her practical education needs a bit more work. As a young woman dreaming of heroic triumphs, Tahlkora has diligently studied tales of romance and high adventure. She's as fluent with the folk tales of Istani commoners as she is with the thrilling narratives of great literature. Now that she's seen what adventuring is like in the real world, however, the difference between dreams and reality is rapidly becoming more apparent.

Tahlkora (born either 1057 or 1058 AE) is a Vabbian Hero and a Monk. She was born and raised a noble, but ran away from home around the age of 18 to experience real adventures and heroic triumphs.

R indicates that Tahlkora must be in the party

R indicates that Tahlkora must be in the party 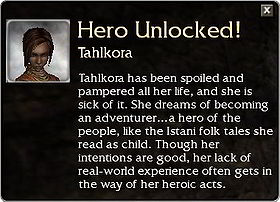 Characters of other campaigns unlock Tahlkora during the primary quest Battle Preparations, obtained from Seamarshal Bendro.

Tahlkora starts with basic Monk armor, which includes a Prophet's Scalp Design, labeled as Istani armor but with its own unique appearance. Her armor has an armor rating of 3 to 60, depending on her level.

"Uhm, hello. What's that? Yes, I'm from Vabbi. No, I'm no one important; just a simple priestess of Lyssa. I know how to heal wounds and protect you from danger. But I don't plan to stay in the temple. I'm going to be an adventurer! You'll see."

"We'll take on anything the Kournans throw at us because we're heroes...right?"

"Listen, I'm very sorry I didn't reveal my identity, but I didn't think you'd let me accompany you if you knew who I was. We'd best not be seen together right now. I'll meet up with you again once the party is over. My father is extremely upset and he might take his anger out of you."

Why didn't you tell me about your father?

"If it were up to him, my father wouldn't have me do anything but stay at home and act like a princess. I long to travel and see the world, to do something grand with my life and be like the great adventurers the story tellers spin tales about. If you found out who I was, I was afraid you'd just send me back to my father. I'm truly sorry."

"This map is important, I just know it is. Jerek might not believe me, but please... say you do?"

"Oh, dear! Someone tore this map apart, can't you tell? Whoever did was trying to hide something. I think Koss believes me!"

"It's definitely a map, and look, it's got the mark of Kourna on it. If we follow the map, it will take us to whatever they're trying to hide!"

"It worked! It really worked! I was so scared back there, talking to those corsairs. Is this what it's like to be a real adventurer? Wow. We should take this information to Jerek right away!"

"That Jerek's even meaner than Melonni to me. They give me the shivers."

"Jerek's going to give us a chance to speak in front of the Elders and the Kournans? That's terribly frightening! All those people, staring at us. Don't worry... I'll... meet you there."

"I wanted to make it to the meeting, but Kormir arrived and I had to tell her what was happening right away. Oh, but now everything's such a mess, isn't it?"

"Oh, yes, the Ritual of Winds is so very important. We have to have the gods on our side, because strength can't win wars. Only faith."

"Why did the djinn attack? Are the servants of Dwayna saying the attack is a bad idea?"

"Ooooooh, this is scary! Ghosts? I don't know anything about ghosts! Adventurers don't deal with ghosts! I shouldn't have to, and you can't make me!"

"That wasn't as bad as I thought it would be. Koss has been telling me that I'm very brave."

"This is so exciting! I just wish nobody had to get hurt. Especially not me!"

"Kormir's so certain we'll win. That must be what it's like to be a real adventurer. It's just inspiring. I'm so glad I'm out here at last, a part of it all!"

"Can't we just tell the Kournans to leave us alone for a while? I guess not. Things just aren't as simple when you're an adventurer."

"I can't believe I'm really out here. I mean, adventuring. It all seemed so much simpler when I was at home thinking about it, but now that I'm here it seems so big and scary. But I have to pull it together... Koss is depending on me."

"If I was a powerful Monk, I'd charge in there and make them let Koss go! But I'm not. I'm glad I'm with you. Even if Melonni keeps shooting me that look."

"Those are Sunspears they've captured ... what can I do about something a dozen Sunspears couldn't handle?"

"We did it. We actually did it. I wouldn't have thought we could, but we did! Wow, wasn't Koss the best? I think he fought five of those Kournans at once."

"I held my breath all the way through that! I was so tense! Koss is so strong, you're so talented. Though I don't like the way that corsair woman was flirting with Koss."

"Why won't they do anything? The Elders can't protect Istan from Varesh alone, she's too powerful. Are they sending us away just to save our lives? What about the villagers?"

"I am afraid I don't know of any other way to Vabbi. There were a lot of guards in Jahai, and they were very nice when I came through the first time."

"A djinn brought you a message? That's got to be important. It's bad luck to refuse a djinn when it asks you something, you know."
"Zhed's coming with us? Yes, that's a good thing. Maybe Zhed will change his mind when he realizes he has to be around as many "two legs."

"I'm sure I'm ready for a test. Are you sure we shouldn't go after Kormir instead?"

"The Master of Whispers wouldn't ask us to do something if we had absolutely no chance, would he?"

"Unlucky Simon? More like "Unwashed" Simon. Someone tell me why men who live on the ocean and make their homes in boats can't fall in the water once in a while!"

"No Margrid, no Kormir? I guess the Centaurs and the corsairs have something in common: what they want comes first."

"Kehanni of the Lyssan Temple? I haven't seen her in years. It's nice to have a chance to catch up."

"You go to the party. I have something I need to do."

"Vaughn the Venerable? I've never heard of him, and trust me, I've heard of everybody. Why not go?"

"Actors are always shifty types, Kournan actors have proved worse."
"Kehanni! She's in danger! Please, we have to hurry!"

"I'm disappointed in my father, but he's not a bad man. He just needs us to show him that courage will be rewarded by the gods."
"Varesh has made this personal. I swear by Nightfall itself that I'll stop you, whatever it takes."

"These are the lands of Prince Ahmtur. Look at the faces of the people who live here. They know we're their last hope."

"You know, my father never told me about Ahdashim. He didn't tell me a lot of things."

"I've learned three lessons in my travels: keep your courage in your hand, never turn your back on a friend, and know when to ask for help. Vabbi has asked. We will answer."

"We have to get to the Grand Court of Sebelkeh and stop Varesh and her Margonites."

"Oh, no! I have friends at the Grand Forum! I hope the djinn can tell the difference between Vabbians and Margonites!"

"Melonni has been waking up screaming, let's get to her village. If nothing else, she'll see that they're fine, and we'll get a decent night's sleep."

"Harbingers in Melonni's soul? Ew. Well, I guess that kind of makes sense. Nobody could be that mean unless something was really wrong with them!"

"Only the undead lord Palawa Joko managed to brave this desert. That makes me... concerned."

"We can do this. For ourselves. And for Kormir."

"An undead general in the Bone Palace? This we can handle."

"Whoa, djinn fire. It's like fireworks, but for big, ugly, slimy wurms!"

"Once upon a time, Palawa Joko would have frightened me. Now he just disturbs me."

"It must be so hard for Koss and Melonni. If I saw Vabbi like this... I don't know what I'd do. Abaddon has to be stopped."

"Everything's so big and terrible.... No. I'm not going to be frightened. I'm an adventurer, and more, Elona needs me."

"The Gate of Fear is where Rahmor said to meet him. We helped all those Spirits, now let's help Elona and make sure Abaddon never gets out of here."
"What kind of allies does Abaddon have?"

"Kormir isn't saying it, but you can tell she's worried. I am, too."

"The gods have got to be on our side! They just don't know we're here, or that we're lost."

"I feel the power of the gods inside my heart and in my spells! Thank Dwayna and Balthazar for their courage. I'll never question them again!"

"Vabbi is safe from Abaddon, and I can go home. I don't think I will, though. The world is too big, and I've only just begun to see it."

"Are you staring at me? Did I do something wrong?"
"Beautiful things can be dangerous. Just ask the spider about her web."
"I am learning all the time."
"Koss has been giving me good advice."
"This adventuring stuff isn't what it's cracked up to be. I've yet to see anyone in a loincloth!"