Vekk is an eager young Asura. He and his people have been driven to the surface recently, and he is curious and interested about this new development. Of late, Vekk has been working with another underground race, the Dwarves, on maintaining a set of magical gateways through the Depths.

Although he may not seem daring or even outgoing, his clever mind and agile fingers can create amazing magical items and explosive assistance when his companions are in need. If you can overlook his grouchy and slightly condescending nature... he's actually a very good friend.

As with all Asura, Vekk believes in the Eternal Alchemy, the world's universal flow of energy and purpose. He is considered one of the finest minds among his people, and is always looking to perfect his craft. Of course, it’s not easy being perfect when you're surrounded by idiots... 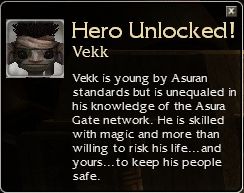 Arrival at Boreal Station upon completion of the Beginning of the End will unlock Vekk for that character.

Eye of the North, in the Norn Fighting Tournament[edit]

Vekk starts with basic elementalist armor, labeled as Asuran armor but with its own unique appearance. Like Xandra and Razah, however, his headgear is shown.

"Trust me. Vekk is the answer to all your problems."

What are you, anyway?
"I belong to a powerful race, the Asura. We are gifted spellcrafters, golemancers, and mageworkers. Superior to all races. My people lived in the Depths but were driven to the surface by the Destroyers. So much knowledge lost! The bulk of my people now make their homes along the Tarnished Coast."

What are these gates?
"Ah, you like them? We travel through the Depths with them. Beats having to carve out miles of tunnels, don't you think? They teleport you to a predetermined destination through another Asura Gate. Most of them are tuned to the Central Transfer Chamber. But when we lost that, the entire network was compromised. A few gates do not tie back to the Chamber, mostly to small backwater places like your homeland. Those are still safe, at least for the moment."

Epilogue
"After all this time, I admit I find you... interesting."

Olafstead (during the Wedding)
"A Norn wedding is all fine and well, but if you want to see a real party, you should see an Asuran wedding! No one is allowed to leave until a precise calculation is made for how much love is in the air. Nothing says 'I love you' like complex algorithms!"

"Are you pondering what I'm pondering?"
"I can calculate our odds of success. How's that for ingenuity?"
"I've been thinking about the Charr. I think they can be domesticated."
"Interesting..."
"My friend, you're jumpy as a dredge in a room full of rubber balls."
"You give a new meaning to the term "counter-intelligence.""

"Are you dumb, or just ugly?"
"Choke on that, physics!"
"Crazy bookah. They always fall for the same trick."
"Gentlemen, this meeting is adjourned."
"Here's my proposal: you stand there and I'll hit you!"
"I can kill you with my brain."
"I will never understand why you bookahs insist on pounding your heads against the towering wall of my intellect."
"I win. you die. Do you need any more lessons on inevitability?"
"If you can't beat them... arrange to have them beaten."
"It's not my fault that you big bookahs can't dodge!"
"Never mess with an Asura when death is on the line!"
"Such a pity."
"Well, it looks like this is the end of the world. Open warfare... with idiots."
"When in doubt, either invent something or kill something."
"You're my kind of stupid!"

Spoiler alert: The following text contains spoilers relating to the story of Eye of the North.