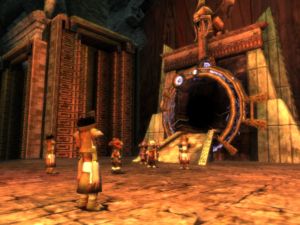 This path leads back to Boreal Station in the Far Shiverpeaks.

Asura Gates are long-ranged portals constructed by the Asura, allowing travel to predefined places. They are found throughout the Depths of Tyria and have an extremely long range. Some even allow intercontinental travel. The Asura constructed most gates to connect to the Central Transfer Chamber — a hub that serves as a connection point between each gate, like the "grand central station" providing access from one gate to the next — allowing diverse travel from each gate. This, however, is not the case for all gates, as some simply operate as a direct link between two gates.

The gate network is powered by magic that is leaked out of the slumbering Elder Dragon, Primordus.

The Asura Gate map icon allows traveling from anywhere in Tyria, Cantha, and Elona to Boreal Station and functions as the Ship icons on maps.