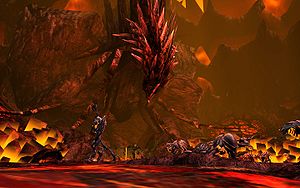 Primordus, hibernating in the chamber of The Great Destroyer.

The Elder Dragons are primordial creatures dating back before the time of the Giganticus Lupicus and long before the arrival of the gods in Tyria. Their powers are said to rival those of the gods themselves, however they are currently in hibernation. Two of the six known Elder Dragons can be seen sleeping in Eye of the North, and at the very end of the expansion storyline, the first one to awaken, Primordus, is shown stirring - though it doesn't awake until 1120 AE. In addition to the two dragons seen in Eye of the North, four more Elder Dragons are known to exist during the time of Guild Wars 2.