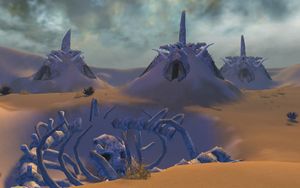 According to scholars, the Giganticus Lupicus, also known as Great Giants and True Giants, were beings that walked the soil of Tyria long before the Forgotten were brought into the world by the gods. It has been estimated that they became extinct by 10,000 BE.

Little is known about the giants other than what can be inferred from their gigantic remains that lay scattered about Tyria. The Giganticus Lupicus also have differing appearances based on their location. One such appearance is canine in appearance, while others appear differently. At least some of the skeletal remains found within the Crystal Desert and elsewhere across continental Tyria and Elona are also Giganticus Lupicus remains, though which ones of the two-seen groups (if not both) is unknown.[1]