Guild Wars 2 is the sequel to the Guild Wars series by ArenaNet. Currently it consists of one base game and three expansion packs.

The base game was released on August 28th, 2012. ArenaNet offered three pre-purchase editions of the game at the time: the Digital Edition, Digital Deluxe Edition, and Collector's Edition. Anyone who pre-purchased the game was given a 3 Day Headstart, which started on August 25th, 2012 at 12:00 a.m. PDT (GMT-7).

The game is set exactly 250 years after Guild Wars Nightfall. Tyria has drastically changed due to the rise of the Elder Dragons that woke up throughout the past 200 years. 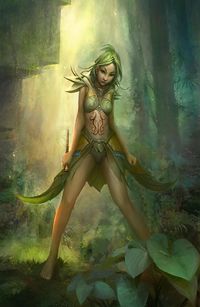 Eight professions are available, though there is no secondary profession:

The level cap in Guild Wars 2 is 80. Characters will have their power scaled down in areas designed for lower level players, to keep content somewhat challenging.

The story of Guild Wars 2: Heart of Thorns™ takes place in the Heart of Maguuma, the deep jungle where Pact forces crashed on their way to confront the Elder Dragon Mordremoth.

As the balance of magic comes undone, lead your allies in the hunt for the rogue god Balthazar, whose scorched-earth campaign threatens the very existence of Tyria.

Old GW2 logo prior to release of the official trailer.