This article is about the gameplay type. For the effect given in PvP outposts, see PvP (effect). 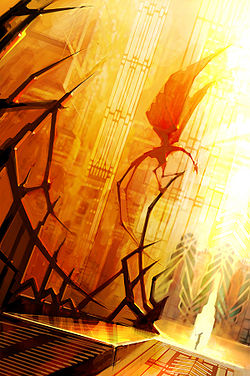 Although you are currently playing a character intended for cooperative play (or a storyline character), you may still compete in PvP with this character if you wish. Here in the monastery you can speak to the arena gate guard to gain entrance to the practice PvP arena for trainees in the monastery. Once you leave the monastery and continue in your adventures, there is a separate location where all PvP takes place. You can travel to the PvP competition zone by clicking on the small boat icon on your map. If you wish to create a PvP-only character, you may do so by returning to the main login screen and selecting the "PvP-Only Character" option. Doing so will create a character that can load directly into the various PvP competition zones. The one exception is Guild Battles, which require that you join a guild before being able to take part.

Player versus Player (PvP) is a style of gameplay that pits players against each other in a competition. The objective in PvP is to defeat the opposing team(s), which can be accomplished by one of several different means, depending on the format. This could be capturing control points, defeating the opponent's Guild Lord, scoring a higher kill count or just regular deathmatch. As balance is a concern in PvP, the PvP effect causes many skills to be weaker in competitive play than in PvE.

In addition to using roleplaying (PvE) characters, players can also create a PvP-only character, which have unlimited access to options that have been unlocked on that account: runes, upgrade components, skills, and insignias. Options can be unlocked by finding them in PvE, by spending Balthazar faction, or by spending real money. Many guilds that focus on PvP play require a PvP-only character for membership because of the flexibility in changing configurations that they provide; a strong PvP player is expected to be able to play multiple professions and multiple builds well.

In addition, there are PvP arenas only accessible to roleplaying characters. Only characters that have not reached a specific level yet can take part to these arenas and elite skills are banned. The format is otherwise the same as Random Arena or Codex Arena, i.e. two randomly-selected teams of four among the players in the outpost compete in a deathmatch.

PvP tactics and strategy differ between the formats, but in general, PvP differs from PvE in the following ways:

The following tactics are specific to a subset of PvP:

Arena battles put two teams of four players against each other. The winning objectives vary, depending on the map. Losing players are sent back to the lobby area, while the winning team awaits the next opposing team for the next match.

There are two kind of arenas, Random Arena and Codex Arena. In Random Arenas, players are randomly put together into teams. In the Codex Arena, parties are formed but they have only a limited number of skills that change every day.

The Global Tournament is only accessible through Heroes' Ascent. Teams consist of eight players, with no more than two henchmen. The tournament consists of several consecutive maps. The losers drop out, the winners advance to the next round. Different map types are used, many of them consisting of more than two teams. However, only one team advances to the next round. The highest number of teams that can play used to be 6, however the number of teams in one battle is now limited to 3. The number of teams is also determined by the map the player is on.

Guild Battles are the highest form of PvP in Guild Wars. Elaborate builds and strategies are used during guild matches. They are the only source of guild rating, which determines the guilds rank on the guild ladder.

Only during special events[edit]