This article is about an outpost. This name is also used for a mission.

As the ancient Canthan name implies, Shing Jea is the jewel of Cantha. Headed by the legendary Ritualist, Master Togo, the monastery provides training to students of all heroic professions, including the Ritualist and Assassin professions native to Cantha. Graduates of the Shing Jea Monastery are recognized worldwide as masters of their chosen arts.

Shing Jea Monastery is a prominent training center for students of various arts and callings. This is the first location that new Factions characters will arrive at upon completion of the tutorial.

New Factions characters start off in Monastery Overlook, which is right outside this location. Characters will be allowed in after completion of the tutorial quest Mantid Hatchlings (or choosing to skip it).

Characters from other campaigns must first get to Seitung Harbor by talking to First Mate Xiang in Kaineng Docks, and then travel west through Saoshang Trail and Linnok Courtyard to arrive here.

(these quests are only available to Factions characters) 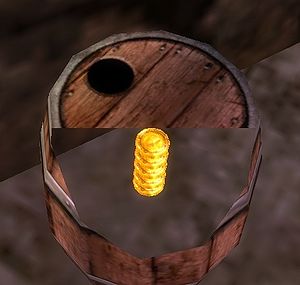 Coins inside a keg near Ludor
Retrieved from "https://wiki.guildwars.com/index.php?title=Shing_Jea_Monastery&oldid=2677826"
Categories:
Hidden categories: