This article is about an outpost. This name is also used for an arena.

By longstanding tradition, full-scale arena combat is prohibited on the rural island of Shing Jea, out of reverence for the monastery of the same name. Yet those who study at the monastery require a place to train in such arts. The solution? Shing Jea Arena, located on the tiny island of Tinnairukan south of the larger landmass... close enough to train, but separated from Shing Jea Island itself.

Shing Jea Arena is the staging area for PvP combat for characters of levels 1 to 10. 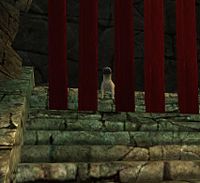 Pug outside the gate
Retrieved from "https://wiki.guildwars.com/index.php?title=Shing_Jea_Arena_(outpost)&oldid=2677157"
Categories:
Hidden categories: