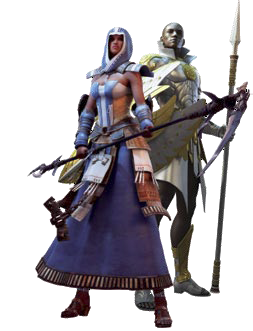 Elona doesn’t have a unified government—the three provinces work side by side—but one alliance of heroes defends the entire nation. From the southern coast of Istan to the northern peaks of Vabbi, peace has its price: the eternal vigilance of the Elonians who guard their nation.

These valiant defenders are the Order of the Sunspears—an elite order pledged to defend the nation against all threats, whether martial, mystical, or supernatural. When the Scarab Plague devastated Istan centuries ago, the Sunspears evacuated the populace and sealed off infected cities. As the Istani slowly resettled the islands, the Sunspears helped restore civilization, protecting outposts and colonies. Whenever brigands and tribes in the surrounding wilderness ready their weapons, wherever the threat of civil unrest grows, the Sunspears rally troops to defend their homeland.

The Sunspears are autonomous, answering only to their own leaders, called Spearmarshals. The Order respects the authority of each province, but insists on the freedom of its members to travel wherever they must to safeguard the nation. Beyond the walls of cities and towns, corsairs, harpies, Centaurs, undead desert lords, and other marauders prey on the unwary. Outside the world we know, malefic forces wait in darkness, patient and potent, scheming of ways to enter the realm of flesh. In darker times, a province may prevent, limit, or forbid the Sunspears from conducting an investigation—since each province has its own defenders—but most Elonian citizens know that the Sunspears are their best hope for protection and salvation.

The devout claim that the gods themselves have chosen the champions of Elona and a new generation has taken up weapons to answer the call. Now you have been chosen—as a Sunspear, you will be trained as a leader. You have a duty to your country: finding threats to Elona and eliminating them. With other heroes by your side, you are the shining light that must drive back the forces of darkness, fighting for the glory of the Golden Sun.