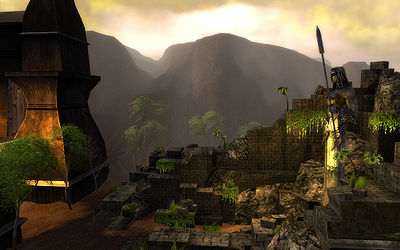 Unearthed ruins of Fahranur, the First City. Decayed over the ages, it holds little of its former glory and is rather a reminder of the Scarab Plague's devastating effects.

The Scarab Plague was an uncontrollable disease that quickly spread to all reaches of Elona in 652 to 656 DR (approx. 452 to 456 AE). It was because of the plague that the first dynasty of Elona, the Primeval Dynasty, fell and during the time of the Scarab Plague Elona was without a dynasty. The plague originated in Fahranur and led to the exodus of Istan, one of the last places to be abandoned being the Sunspear Crypts, from their island home for sixty-eight years (sixty-four years longer than the plague itself). According to records, the first new settlements on Istan had been established in 720 DR.

Scholar Chago has taken up the task of finding information about this malady and has found valuable writings in the ruins of Fahranur, the assumed source of the plague. According to these findings, the illness did not spread in a distinct pattern, claiming lives regardless of gender or age and developing more dire symptoms as time passed. Remains found in the ruins support the claim that insects tore the victims' flesh from within as the cracked bones were bent and bore spherical indentations, suggesting that the creatures were scarabs (hence the name of the plague). Panicked, the people escaped to other parts of Elona, only spreading the plague further. It is still not known how or why the seemingly unstoppable illness vanished.

Most of the writings found during Scholar Chago's research belong to an Istani scholar named Yomindhe, and are so far his only remaining works. He left behind notes for an unidentified friend, piecing together an escape route, the trail ending in the village of Kamadan with the boarding of a corsair ship to Kourna. It is assumed that they all succumbed to the plague: the unnamed friend remained in Istan, the source of the plague, while his wife and child fled with Yomindhe to the mainland where the illness would spread further. The navy's attempt to form a blockade was said to have failed due to the widespread chaos and panic, thus many more people may have left Istan.

"This plague is tearing the city apart. It seems to strike without any sort of logic...young and old alike are devastated by its effects. Those who still survive burn down entire buildings in hopes of cleansing the plague's dire corruption, but it seems hopeless. Word has reached me of a terrible new stage of this plague, and people are claiming that bugs escape from within the boils. I hope that these are only delusions brought on by the plague's effects, but I am beginning to wonder if it could be true...."

"I leave this note in hopes that it will survive the destruction of our land. By the time you read this, my friend, I will have fled the city. The danger here is too great. I hope your ship arrived before the chaos here closed the port. I will bring your wife and son with me to the old farm where we grew up in Zehlon Reach. Fear not, they will be safe there. Whatever you do, my friend, do not eat or drink while in the city… I fear the plague is spreading through the food.
I hope to see you soon.
– Yomindhe"

"My friend, as you have likely discovered, the plague has not been confined to the city. It has only been a day and it already begins to afflict those around us. I have no choice but to take your wife and son with me to the small village of Kamadan and book passage to the mainland. I hope to flee the plague's effects. I am almost certain now that it has something to do with the grain we harvested, so I hope that the mainland is protected from this horrible malady. When you find this, make haste to Kamadan. If you cannot find me, follow the map I have left in this chest. If I leave Istan, I will bury a message there for you as well.
Your wife and son miss you very much.
– Yomindhe"

"My friend, I hope you can find this message. I am sorry for leading you on such a journey, but know that your wife and child are still safe. Istan has been quarantined, but in the chaos the navy cannot enforce the blockade. While I was unable to find any honest captains to take myself and your family to Kourna, I managed to find a corsair willing to grant us passage for a fee. I paid him an additional sum to allow you passage when you arrive. Head into Kamadan and look for a small craft near the docks flying a dark flag with a star on it. Speak with the captain; he will provide you passage to Kourna if he has not already fled. When you arrive on the mainland, speak with the Xunlai. I will have a message for you with them.
I have enclosed my research on the plague with this message. Even if you cannot find me, I hope that you can use your connections to make sure the research will be put to good use.
– Yomindhe"