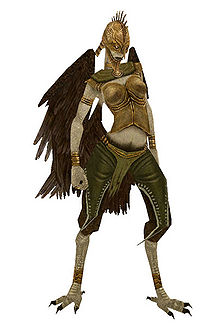 In Vabbi, fierce and filthy harpies prey upon wandering bands of travelers for anything they can steal. Some legends hold that the harpies were once beautiful winged creatures who proudly served Dwayna, the Goddess of the Air, until a catastrophic event cast them down from the heavens. Now they stalk the earth as they struggle to survive. Vabbi poets elaborate further, claiming that the fallen harpies now hate everything that walks on the ground. Vabbi scholars dismiss such romanticized notions—this race of screeching, vicious, petty thieves is probably too simple-minded, they say, for such complex motivations.

As jealous, hateful creatures, harpies delight in tormenting other intelligent races, sometimes raiding and robbing more for twisted amusement than out of a desire for wealth. Dervishes claim they’ve seen harpies stealing food from wanderers just to watch them starve, or in some cases, snatching bright treasures from adventurers purely out of envy for the shiny baubles wanderers wear.

Harpies gather in extended families, each with the social structure of a corrupt matriarchy. Once a harpy matron decides to sink her talons into a stretch of countryside, her descendants will make life miserable for any who pass through those lands. Most harpies are clever enough to hunt in lands frequented by defenseless travelers, but throughout history, a few harpy matrons have set their sights on rarer, brighter treasures.

In some Vabbi myths, only the matron of a harpy family can breed, making life even more unpleasant for other females—but this may just be a thinly veiled allegory attacking certain powerful wives in the estates of wealthy Vabbi.