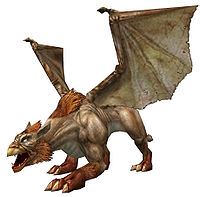 Griffons are four-legged winged creatures that can be found in either locations of extreme heat, like deserts, or extreme cold, such as high up in the mountains.

There are many depictions of griffons throughout Tyria and Elona, though these depictions often show the Griffons with feathered wings while they actually have bat-like wings.