This article is about creature type. For the NPC, see Ghost (NPC). 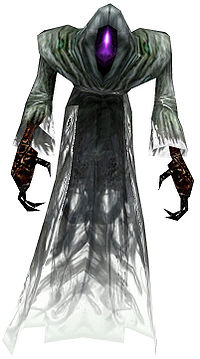 Most restless souls of formerly living creatures have some sort of reason for hanging around a place: an unfinished task, a wrong that needs righting, and so on. They're often coherent, and you can hold a reasonable conversation with them—the few not eager to have you join them, at least. They can be obsessive, or angry, but they're sane—sane for ghosts, at least. They can be recognized by their translucent appearance and their typically greenish skins. Almost all ghosts are non-fleshy, i.e. they are invulnerable to certain conditions and leave invisible non-exploitable corpses.