Phantom Residue is a trophy dropped from ghosts in the Mists. 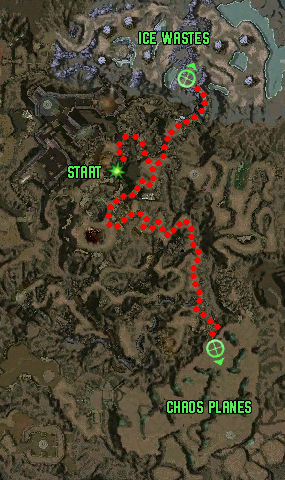 Two different areas for farming in the Underworld

Phantom Residue is a common trophy item dropped by ghostly enemies that populate the Underworld. They can be more commonly found in the Chaos Planes and the Ice Wastes. Both areas can be accessed with relative ease with a full party and upon partial completion of the quest Clear the Chamber.

Upon entering the Underworld, it is recommended to slay the nearby groups of Bladed Aatxes, Grasping Darknesses and any wandering Skeleton of Dhuum before accepting quests. Return to the Lost Soul and accept the quest Clear the Chamber. This will cause additional groups of Grasping Darknesses to spawn. Eliminate them to gain access to the other areas of the Underworld. Further completion of the quest Clear the Chamber is not required for the purposes of farming Phantom Residue. You may proceed towards the Chaos Planes or Ice Wastes at this point.

Head southeast to reach the Chaos Planes, closely following the route provided as many paths branch off into different directions. Be wary of the many traps laid down by Obsidian Behemoths. Many of the enemies found here will drop Phantom Residue, but exert caution when slaying Banished Dream Riders, as they will spawn three waves of Mindblade Spectres.

Travel northeast and you will quickly find yourself in the Ice Wastes after a few groups of Bladed Aatxes. Enemies of interest for farming Phantom Residue are the Smite Crawlers. They will often be accompanied by wandering Coldfire Nights.

The quest A Good Deed. offers players unable or unwilling to enter the Underworld a meager opportunity to find Phantom Residues as it spawns a few dozen Smite Crawlers and Tortured Spirits. Be prepared to exit the zone when the dialogue with Sarah finishes so that you will not have to abandon the quest.