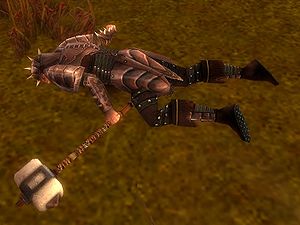 Example of a corpse.

Most fleshy creatures leave a corpse when they die. As in "real life," a corpse is the lifeless body of the original creature. Corpses may be used to resurrect dead allies, or may be exploited for certain Necromancer spells, as well as the Wurm skill Junundu Feast, and the Devourer skill Siege Devourer Feast.

Skills that require a corpse in some range, like Nibble or Signet of Sorrow or Animate Bone Fiend always refer to a fresh or exploitable corpse that has not yet been exploited.