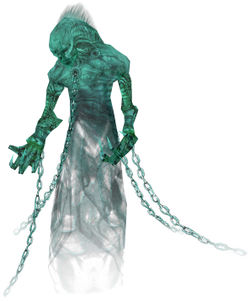 Spirit from an attacking binding ritual.

Spirits are creatures summoned forth by Rangers and Ritualists. These spirits cause certain effects, either directly to foes or across large areas. Two of the same type of spirit cannot be summoned within the same area; if a second spirit is summoned, it will destroy and replace the first spirit. The effects of different kinds of spirits, however, will stack together. If an enemy has summoned a spirit, you can destroy that spirit and remove its effects by attacking it like any normal foe. Additionally, spirits die away after a period of time, dependent on the caster's skill. But be warned: some spirits cause effects when they die or are destroyed.

Spirits are a type of summoned creature that are created by Rituals, certain monster skills, or that appear as a hostile creature during particular missions, quests, or in the Depths of Tyria. In addition, the PvE version of Signet of Spirits creates 3 spirits.

Only two professions have skills that can summon these NPCs: Rangers (through Nature rituals) and Ritualists (through Binding rituals). The only other ritual available to players is the Ebon Vanguard skill, Winds. A small number of foes have specific skills for summoning spirits, such as Kuunavang's Corrupted Dragon Scales.

Although ghosts also have translucent green, blue, or purple skins, they belong to a different creature type and have very different characteristics, regardless of their name.

All spirits created by rituals have 31 energy (hostile spirits in Hard mode have 41 energy), independent of level and Spawning Power rank, and have four pips of energy regeneration. However, none of their attacks actually use energy.

Skills that specifically interact with spirits[edit]

See also: Skills that specifically interact with binding rituals and with summoned creatures

Bug.Heroes in Guard Mode will target non-attacking spirits; both heroes and henchmen will go out of their way to attack spirits.

Anomaly.Foes are able to discover the current location of spirit creator, who is out of their aggro area but within spirit range, and often run directly to them after spirit dies.

Anomaly.Spirits will sometimes lose aggro if they or the one who summoned them aren’t attacked. This usually happens with melee when the spirits kill an enemy and there are no ranged attackers to maintain aggro but can happen other times. The easy solution is to simply attack the enemy to regain aggro and/or move into aggro distance.