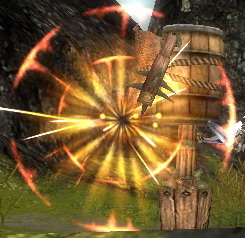 A critical hit is a successful attack that deals additional damage, by negating 20 points of armor rating. In addition, player characters deal maximum damage with their weapons. Some skills, notably those with the keyword "critical" or "keen", improve the chances of criticals or depend on crits to trigger additional effects. Critical hits are especially important to Assassins, whose primary attribute, Critical Strikes increases both the chances and the benefits of critical hits.

The chance of scoring a critical hit depends on these factors:

Critical hit chance in % with Critical Eye, Way of the Assassin (WotA) and Way of the Master (WotM)

This is not simple addition: critical chance multiplies between skills. However, there is no way to determine whether there is a maximum critical hit chance; the base rate remains unknown. The calculations above demonstrate that there is no special critical hit synergy between Critical Eye and either the Way of the Master or Way of the Assassin.

Skills that increase the chance of critical hits[edit]

Skills that benefit from critical hits[edit]