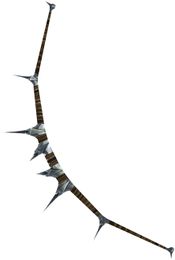 A bow is a two-handed projectile weapon, preferred by Rangers, that requires a minimum Marksmanship, Spawning Power (in case of the Anniversary Flatbow "Oracle") or Critical Strikes (in case of the Anniversary Shortbow "Whisper") rank to deliver its maximum of 15-28 piercing damage. There are five primary types of bows, each with properties that suit specific situations. Bows are also used to pull enemies away from well defended positions.

The following table shows the different inherent properties of the bow types:

2 Although most bows in Guild Wars are named "(skin) (type)", as in "Jade Longbow" or "Ancient Recurve Bow", many Core and Prophecies bows have names which do not specify their type.

3 Range is approximate and is measured in aggro circle / Danger Zone radii. Range is also affected by elevation: arrows fly further from higher elevations (relative to target) and shorter from lower elevations.


4 Flight time is at shortbow range.

This is a list of all the different appearances a bow may have. It is completely independent of its stats and modifiers; for example, a Grinning Recurve Bow may be as effective as a Tormented Recurve Bow if they share the same inscription and modifiers.

1 The Ironwing Flatbow is only available in elite missions.
2 Not available as a drop.
3 Zehtuka's Shortbow can be found lying on the ground in various explorable areas in the Desolation.

Bug.Bows frequently fail to work properly on bridges, stairs and balustrades. It's possible to use a touch skill on an enemy, then attempt to shoot it with a bow, and get the "obstructed" message.