The Norn are a race of nine-foot-tall warriors who live in the northernmost Shiverpeaks. They revel in the harsh climes, leading dangerous lives among savage beasts. These mighty hunters are not organized into a single nation. Instead, those who display exceptional strength and prowess in battle establish homesteads, though they are certainly not considered "rulers". They often spend years at a time tracking a particularly strong or clever quarry; they never give up on a battle, a pursuit, or a friend.

The Norn revere the spirits of nature—from the wolf to the snow lynx - but the most powerful of these is the Bear Spirit, who, according to myth, blessed the Norn with the ability to change shape and "become the bear".

A race of shape-shifting half-giants from the north, the Norn value personal strength, victory, and purifying the soul through battle. They revere the spirits of animals and call on them like shamans. Norn can access a skill that changes them into a half-Norn/half-bear, with increased health and melee damage.

The Norn are a highly independent race with a fighter-centric society, holding strength and prowess in combat above everything else. To a Norn, the greatest shame is not dying in battle, but rather not having the tale of their life, especially death, told. Due to their independence, the Norn are hardly seen in large parties with the exception of great hunts, festivities, and in the larger homesteads like Gunnar's Hold.

For the Norn, in order to wed, the couple must be of equal reputation, and marriage symbolizes the combining of their tales. During the wedding, someone must speak on the behalf of the two to show their worth for the other.

The norn are not able to interbreed with humans[1], although Olaf Olafson, his daughter, and Danira imply or state otherwise.

According to Jora, the Norn believe in the hall of spirits, a place "where the brave live forever." 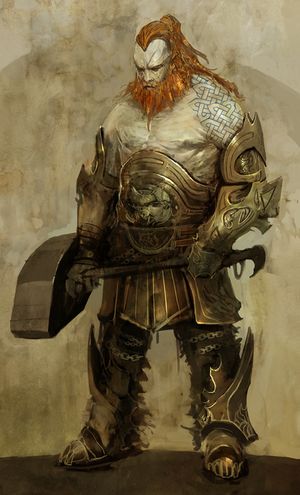 Concept art by Kekai Kotaki.
Warning: This key section of the article is incomplete. You can help the Guild Wars Wiki by expanding it.

Norn culture is highly individualistic with a focus on personal success and glory—particularly when gained from the hunt or in a battle. The norn do not fear death as they believe the bold and strong can achieve immortality, but they do fear they will be weak and end up forgotten. As a result each norn seeks to prove themselves, to build their legend through feats of individual valor and great victories. Every norn hopes their legend will be told by the skaald and celebrated at a moot with story and song. Norn usually have a great sense of personal honor, for a norn without respect from others is already forgotten. For many norn, the focus on prestige means they're willing to accept any challenge which will prove their worth. They will never give up on their battle, quarry or friends, even if it means years spent tackling a strong enemy or difficult task. Yet for other norn the pursuit of prestige translates to bragging, bullying, unwise snap decisions and an unwillingness to listen to reason.

Norn are a hearty, proud people—quick to anger, but also to forgive. They are, by their nature, a race of optimists, keeping a positive outlook even though they have been driven from their homelands. A setback is seen as just another challenge to overcome. They respect those who can best them in a fight so brawling among norn is common. Drinking alcohol, often to excess, is also a large part of norn culture. Being drunk and fighting is not an uncommon combination, for example, norn alemoots feature competitions of 'skill' which require the competitors to be very drunk to compete.

In modern times, the norn hold an annual grand moot, called the Great Hunt. The Great Hunt features a dangerous beast for fighters and hunters to try to kill, as well as what is usually at a typical moot. In order to join in on the Great Hunt, a norn must prove themselves worthy by presenting a trophy from a recent kill. The norn also hold a specialized moot called an The Great Norn Alemoot, which specializes in testing how much one can drink and still complete an obstacle course of sorts.

A norn might proudly trace their worthy ancestors through many generations and may pass a common name through a family (such as Olaf Olafson, seventh son of Olaf) but a great ancestry and family connections do not grant automatic respect to a norn. Everyone is judged not by their lineage or associated group but by what deeds they have done. There is no such thing as infamy to the norn; they are often tolerant of an individual to whom other races might treat with hostility by association.

Two norn will marry, but only if they are of equal status. During the wedding, someone must speak on behalf of the couple in order to show that they are a worthy match for each other.

Despite the cold of their homes, the norn are often only lightly clad. This exposes skin which is frequently elaborately tattooed in Celtic style motifs.