Jora is a younger Norn, beset by tragedy. Like most of her generation, she has been seeking to establish her name and reputation. Only the hunters of the greatest prey are considered worthy among her people, and as such, she and her brother Svanir trekked through the icy uplands and valleys seeking the most challenging prey.

On one of their hunts, Jora and her brother encountered a great, dark power, and were transformed by it. She lost her Nornish ability to shapeshift into bear form, while her brother suffered a darker fate. Now without a family or homestead, she hunts across the Norn lands of the Far Shiverpeaks seeking redemption of her name and forgiveness by the Bear Spirit. To achieve her goals, she will undergo any ritual, achieve any quest, and seek any treasure needed. She will even accept the help of humans. 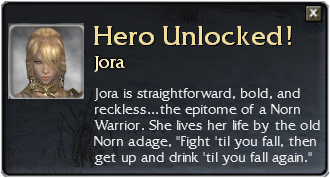 Complete the Curse of the Nornbear quest at Sifhalla and Jora will join your party.

Jora starts with basic warrior armor, labeled as Norn armor but with its own unique appearance. Unlike most heroes, her headgear appears to be a grey Norn Woad. 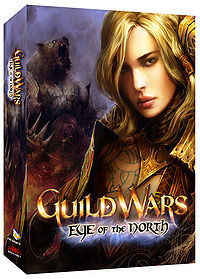 During Against the Destroyers, Tracking the Nornbear, and Northern Allies
"By the claws of the bear spirit, I vow to regain my honor. Sorry, did you say something?"

Who are the Norn?
"The Norn are a powerful and proud people. We make our homes in these icy climes, and hunt the creatures of the mountains. We live for today and rely only on ourselves, for who knows what tomorrow will bring, or when friend will become foe. When you meet a Norn, be prepared for battle. Most will wish to test your mettle before speaking to you as an equal. Not I, though. I am hunting bigger prey."
Did those Norn just turn into bears?
"You mean Olaf and Sif? They are highly regarded among the Norn for their prowess, and favored by the bear spirit. Bear has granted them the power to take her favored form, the better to hunt and survive here! Someday, I shall regain that favor as well."
What is the Eye of the North?
"To the north of Boreal Station, a huge structure reaches toward the sky. You cannot miss it. It has been there since before the Norn first came to these mountains. We always avoided it. Humans, though, are less wise; a group of them, the Ebon Vanguard, have made it their home. If you seek other humans, you should go there."

During Curse of the Nornbear
"What do you want? Are you staring at me? You want some of this? Do you?"

Epilogue
"Thanks to you, I can become the bear once more. For that I am forever grateful. We will hunt together again."

Olafstead (during the Wedding)
"A fine Norn wedding, if I've ever seen one. May neither of them ever hunt alone again."

Norrhart Domains
"I could hear you coming from a league away! It's a wonder your family never starved."

Bjora Marches
"Careful, now. Don't mix your clumsy footprints with those of my prey."

Varajar Fells
"I appreciate your eagerness, but I doubt you are up to the challenge. I fear I must complete my task on my own."

As a hero in your party
"Never leave home ahead of your axe and sword. You can't feel a battle in your bones, or foresee a fight before it happens."
"The generous and bold have the best lives."
"The Norn will not change simply because the Dwarves do not understand our ways. I'd rather be hated for who I am than loved for who I am not."
"Today is a fine day to live...but an even better one to send heroes to their graves. I am not afraid of either."
"Hail to the future! An axe age, a sword age, an age where shields are cleft assunder. It is a wind age, a wolf age, before the world plunges headlong into battle. This is the age of the Norn!"

"Battle at last! Cut them down!"
"Best hurry, my friend, or there'll be none left for you!"
"By Bear and Raven!"
"Come, you who carry corpses; the raven flies over the plain, the battle is joined!"
"Die, cur!"
"Fight beneath a cold sky, a clouded sky, a deadly wind-borne sky!"
"Good. Bad. I'm the girl with the big weapon."
"I bring the snow and biting winds! I bear the fury of the Norn upon my blade!"
"I fight for glory!"
"I pity you... you were not born a Norn!"
"I see the hall of spirits, where the brave live forever!"
"If you face a Norn, do so courageously. It will be the last thing you ever do."
"Norn do not know fear!"
"You are not Norn. Therefore, you will perish."
"You seem to be in a hurry to meet death."

Anomaly.Although she is supposed to be able to become the bear again at the end of Curse of the Nornbear, she cannot use the skill Bear Form as a hero in the game.