Pyre Fierceshot is an outcast, persecuted by the Charr Shamans for daring to speak out against their ways. After his warband killed a Shaman and destroyed a temple, Pyre and his companions fled the ruling shaman caste. Pyre hates them with a fury that only one raised to worship false gods can understand; he has been betrayed, tricked, and deceived, and he has sworn never to fall under the spell of the Shamans again.

Pyre celebrated the demise of the Titans, those whom the Shamans called gods, and now watches with rising anger as the priests continue to deceive his people. At every step, the Shamans seek to tighten their grasp, bringing the Charr once again under their false rule—enslaving them to powers who do not deserve respect, much less worship. The cycle of dominance and slavery must be broken—and the Charr must be free... 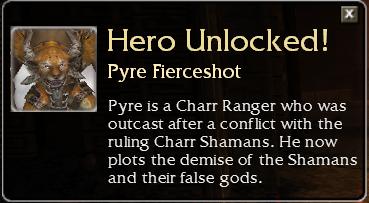 Unlocked upon completion of Warband of Brothers.

Pyre starts with basic ranger armor, labeled as Charr armor but with its own unique appearance. Like most heroes, his headgear is hidden.

"Hate is blinding. I prefer to see my prey."

"Move your stubby legs as fast as you can, human. We must free my brethren!"

"You show the cunning of a Charr and have no fear. For that, you have my respect, human. When the time comes that we must fight again, I shall not aim at you."

"My father was a great soldier. Without him, Ascalon would not be the smoldering ruin it is today. I will honor his memory."
"Never eat something that isn't twitching."
"The Vizier destroyed his own country rather than fight us. That... is a compliment."
"There are no gods. There is only pain and those willing to end it."
"When I was a cub, my grandfather used to light a flame under a moa bird's feet and watch it squawk. If we don't get moving soon, I'll introduce you to him."
"Yes, mouse. Your people will retake their homeland... when they can eat ash and sleep in flame."

"Destruction, too, is an art."
"Do not pray for mercy. Your gods are not listening, and I have none."
"Don't waste my time, meat!"
"Fire leaves little behind."
"Humans. Bah! Your limbs rip apart so easily."
"I am Charr!"
"I bite. That is all you need to know."
"Ignite arrows! Burn swords! Battle is upon us!"
"Weak, frightened, insignificant RABBITS!"
"When I'm done with your friends, I may keep you alive... for a while."
"You know what the chain of command is? It's the chain I beat you with until you understand who is in command!"
"You will burn like Ascalon!"