This article is about a primary quest. This name is also used for a Zaishen mission quest. For the dungeon, see Cathedral of Flames.

Most of this dungeon will be fairly simple and straightforward to progress through. Watch out for Charr Flameshielders and their area of effect spells, especially if your party is composed of heroes and henchmen. Also be warned that Charr warriors carry Resurrection Signets and Charr Dominators have Resurrection Chant.

The second level has only slightly larger groups of Charr. Follow in the general direction of the quest marker and you'll soon see a lone Charr Prison Guard but behind a large group of Charr. Use a bow to draw out the Charr in small groups making it easier to attack them rather than a rush that almost certainly will end in death. He will attempt to run away. Just kill it and grab the key. Follow the path around and towards the next prison. Unlock it to find Cowl Fiercetongue inside, an elementalist. The quest marker will update and point to the exit to the next level. Head towards it. When you start seeing Bloodweavers, be careful. There are several hidden groups of spiders in the chamber with the exit which drop down. A group of spiders will approach when you are close to the exit portal.

On the final level, it is more or less the same. The third Charr Prison Guard is easy to spot. Take it out and grab the third key to free the monk Roan Fierceheart. One more Charr Prison Guard holds the key to the inner temple where Flamemaster Maultooth is located.

When you reach the central chamber of the inner temple, it is wise to kill off the 5 paired groups of warriors that surround the chamber, as they will run to join the fighting later. Maultooth will activate a pair of Charr Effigies. They are dangerous elementalists and lethal against unprepared parties, it is easier to kill them with Pain Inverter. Try to pull them from the side so that the two of them won't activate their highly damaging skills at the same time. Once pulled one at a time, the party can focus on one of the two sides of Charr, and then finally go for the center. Be aware that two Charr Flameshielders and two Charr Axemasters may also join the fray. Maultooth's group of two other Charr can be kept out of the fight with careful pulling. Take them on only after killing the Charr Effigies' group. Focus on Maultooth and interrupt his skills and he will go down quickly.

Try to move inside Cowl Fiercetongue's Ward Against Harm every time you are attacked by Charr Effigies or Maultooth.

If your party wipes multiple times and you rack up Death Penalty, try approaching from the right and pulling the Effigies aside. Then when you die, go around the left side, killing Charr and not aggroing the Effigies, and take out Maultooth.

If you'd like the final battle to be more on the easy and manageable side, just bring a longbow and equip it in your alternate weapon set. The Charr Flameshielders, each Effigy, and the Axemasters are all separate pulls. Park your party about 2.5 Danger Zone ranges away and pull separate creatures in nice, bite-sized chunks. Interrupts help against the Effigies. Daze also works to good effect. 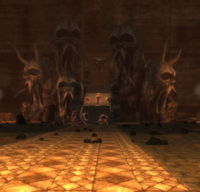 Alternative: There is a very easy way to deal with the final battle. Flag your heroes and henchmen just in front of the stairs, and quickly run with them, continuing up the stairs until you can't go any further. Then turn around, equip your bow, and using Ignite Arrows, fire a shot upon shot at Maultooth. He won't attack you, even if your entire party has died, making him totally vulnerable to your attacks.

You could rush up the stairs taking the Effigy with you. They will stay at the top of the stairs even if you die. Then just come down the stairs and finish Maultooth off.

Alternative 2: If you have a strong party that can deal a good amount of damage, rush to Maultooth and focus all damage on him. The mission ends when he is killed and the Effigies take a few seconds to activate and aggro to you, so if you are quick in dispatching Maultooth you can end this quest quickly.

Charr (all levels unless other wise specified)

Break into the Cathedral of Flames and free the captive members of Pyre's warband.

Gron Fierceclaw
Are you ready to rescue my comrades?

Decline: "Leaving them locked up sounds good to me."

Pyre Fierceshot: "This is the Cathedral of Flames, a power base for the Shaman caste and their witless followers. The captive members of my warband should be inside."

Charr Prison Guard (or one of the other Charr in his group): Guards! Stop these intruders!

Seer Fiercereign: "Did you bring these human slaves to carry your pack, Pyre? Or are they lunch?"
Pyre Fierceshot: "Times have changed, Seer. These humans help us of their own free will." [if Gwen is not in party]
Gwen: "Slaves? You brutal animal! all you can do is bite the hand that rescues you!." [if Gwen is in party]
Seer Fiercereign: So it seems we fight together. Cowl and Roan are held further below. Let's not waste anymore time.

Pyre Fierceshot: "Judging by these tracks, one of my warband is being held to the south. Head that way, human. Quietly!"

Pyre Fierceshot: "Roan! And here I looked forward to selling the armor off your corpse."
Roan Fierceheart: "Another day, Pyre. Flamemaster Maultooth, the hierophant's torturer, is nearby. Maultooth's doorguard possesses keys to the inner temple."
Pyre Fierceshot: "Good. They'll soon learn their gods are false when they reach the afterlife." [if Gwen is not in party]
Gwen: "What are we waiting for? I want to bury my sword into the heart of Maultooth." [if Gwen is in party]

Bug. Cowl Fiercetongue will not attack nor use skills that target a foe until the party reaches the last level. He will still be targeted by foes.