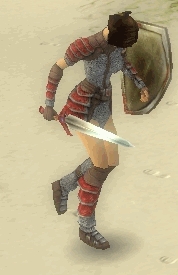 A crippled Warrior limps at 50% speed
(click for animation)

A snare is a skill or tactic that slows or restricts enemy movement. Snares are useful as a melee counter, for countering kiting, or for preventing a player from attaining an objective in a particular PvP mode. For example, one might snare the flag runner in a GvG match, a monk rushing to heal a Guild Lord, or the relic runner in a Heroes' Ascent relic run.

A snare can be thought of as the opposite of a speed boost. Snares can be stacked, but movement rate is capped at -50% slower than normal; however, a single skill that causes more than -50% slower movement can override the -50% cap, such as Winter's Embrace.

See also: Crippled#Skills that cause crippling