"AoE" and "Aoe" redirects here. For the skills, see Air of Enchantment or Armor of Earth.

To fight effectively, you must study the circles of effect. As you approach your opponents, you become more dangerous to them, but they are more dangerous to you. In a similar manner, as you approach your allies, they can help you more, and you can help them more. There are four main areas of effect in combat, three of which we have demonstrated in our circles here. "Adjacent" applies to anyone close enough for you to swing a weapon at. "Nearby" is the next largest area of effect, and "in the area" describes the largest area of effect. The range of the fourth effect, "Earshot," equals the white circle known as the "danger zone" on your Compass.

Area of effect refers to skills or other gameplay mechanics that affect creatures in a specific proximity to the target. 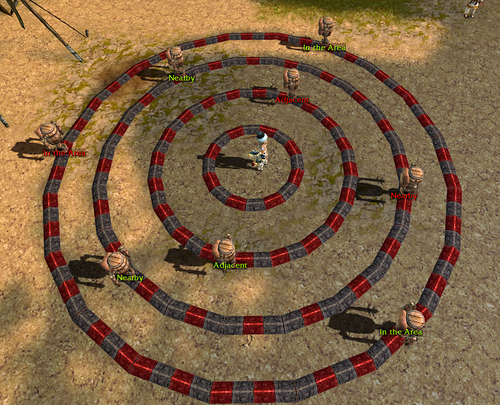 Various ranges of area of effect

Area of effect mechanics in Guild Wars have numerous possible effective radii. All skills with an area of effect greater than the target itself will apply to all targets in a circle within the mentioned proximity of the skill, regardless of any vertical height difference.

Point blank on user
Skills that cause an effect directly around the caster adjacent to the user (e.g. Cyclone Axe).
Skill descriptions sometimes use, "foes/allies adjacent to you."
Point blank on target
Skills that are targeted on an enemy and cause an effect on those within a specific area around the target (e.g. Splinter Weapon).
Skill descriptions sometimes use, "foes/allies adjacent to target."
Line
Skills that cause a long, linear-shaped effect on the ground (e.g Lightning Javelin).

Radii from smallest to largest[edit]

Adjacent
166 gwinches, roughly 1/6 the size of the aggro bubble, larger than melee/touch range, but smaller than nearby (about 2/3). Skills that target oneself use this version of adjacent.
Skill descriptions sometimes use, "foes adjacent to target."
Adjacent to target
The standard area of effect for melee attacks, touch skills, and scythe radius. Skills that target others and say "adjacent" usually use this range instead.
Skill descriptions sometimes use, "target foe and adjacent foes."
Nearby
252 gwinches, roughly 1/4 the size of the aggro bubble or 1.5x adjacent.
Skill descriptions use "nearby" foes or "near the target."

In the Area
322 gwinches, roughly 1/3 the size of the aggro bubble, slightly below 2x adjacent, and the largest area of effect that any offensive spell currently has (e.g. Deep Freeze). Ward and well spells have this area of effect.
Skill descriptions use "in this location or initial location."
Earshot
1012 gwinches, exactly the size of the aggro bubble, and the largest standard area of effect. Since the aggro bubble is drawn on the compass, it's easy to guess the range in the middle of action.
Most shouts have this range, and most ritualist skills that require spirits specify that they must be "within earshot". Scrolls of Resurrection also have earshot range.

Spirit range
Unless otherwise specified, all passive spirits (e.g. Life) affect an area of 2512 gwinches, slightly less than 2.5x the aggro bubble and slightly more than half of party range. This covers a distance about the size of the compass center to halfway between the end of the aggro bubble and the compass' end. This also is the minimum distance at which any two spirits with the same name created by members of the same party can coexist.
Ritiual skill descriptions use, "within range" or "in range".

Party area
5020 gwinches, the largest in the game, and only for skills that affect the whole party (e.g. Heal Party). It is about 12% larger than the area visible on the compass. When party members who are too far away have their names turn gray in the party window, they are out of party range. This is also the maximum range in which enchantments can be maintained.

Anomaly.Cautery Signet and Mystic Healing have an unlimited range, affecting even party members outside of party area.