Explosive Zaishen Disciple
"Understanding is half the battle... and now you understand."
Origin: Cantha
Age: 27
Profession: Elementalist
This guy talks too much. Sousuke always has advice, wisecracks, and commentary on his current situation. His amused outlook on life, unrestrained curiousity, and quirky sense of humor are rare for a Zaishen warrior, but he backs it up with a flamboyant, explosive fighting style. A mission is only a failure, he believes, if you don't learn anything from it... and Sousuke doesn't care much for failure. As a Zaishen warrior, he insists he's one of the deadliest combatants in the world, and he has a compulsion to prove it again and again. If that's not enough, he'll tell you, again and again.

Acolyte Sousuke always has advice, wisecracks, and commentary on his current situation. His amused outlook on life, unrestrained curiousity, and quirky sense of humor are rare for a Zaishen, but he backs it up with a flamboyant, explosive fighting style. A mission is only a failure, he believes, if you don't learn anything from it... and Sousuke doesn't care much for failure. As a Zaishen disciple, he's one of the deadliest combatants in the world, and he has a compulsion to prove it again and again. 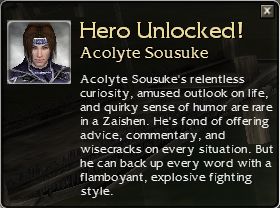 Complete the quest Student Sousuke, which is unlocked by completing the quest Zaishen Elite. Both quests can be obtained from Field General Hayao. (Accepting the quest to recruit Sousuke prevents the recruitment of Acolyte Jin until after the completion of the Nightfall campaign.)

If you first chose Jin, you can recruit Sousuke with the Gain Sousuke quest available in the Throne of Secrets.

Acolyte Sousuke starts with Elementalist Zaishen armor, which is nearly identical in appearance to blue Elementalist Shing Jea armor, as well as a Zaishen Eye for a headgear. His armor has an armor rating of 34 to 60, depending on his level.

"Well, good day! My name is Sousuke. You're lucky you've come upon me in a good mood. I've fried people for looking at me like that. Ha, ha. Just kidding! I'm usually very careful with my elemental magic. I wouldn't hurt a fly. Well, perhaps, if it was Kournan."

"The fire! The explosions! The valiant fights! It's a tale of heroes, and you're the greatest one!"

"Although I don't take myself seriously, I do take my work... extraordinarily... seriously."
"Every soldier we are forced to destroy is one more innocent broken by the lies of war."
"I could take Acolyte Jin in a fight. One on one, I would definitely win. What... you don't believe me?"
"I don't know how we'll make it to the end without going mad."
"Look at this. I've never seen one in this area before. Don't you think that's interesting?"

"Kormir has gone to Cantha, leaving me here to hold down the fort, as it were! I am very excited about working with the Sunspears."

"Mmm-hm. This Jerek... did one of you date his little sister or something?"

"This Castellan Puuba interests me. He is just so very clever... for someone who's missing everything that goes on around him!"

"Tahlkora, it looks like you were right. That map's definitely leading us someplace, and I'd bet it's not a sandy beach with sweet juice drinks."

"I'm betting we'll find more than Jerek bargained for in Cliffs of Dohjok. If it's a treasure map, I vote he doesn't get a share."

"Corsairs and Kournans. Jerek won't believe us if we go tell him, so we'd better head for Blacktide Den and do a little snooping around of our own."

"I looked fantastic in those corsair clothes. Too bad they're not in fashion at the emperor's court, or I'd be all the rage."

"Oh, bother. I think Jerek's right and truly angry at us now. He didn't think that map would come to anything, did he?"

"Ironfist is all bluster and no bang. Let's take the information back to Jerek and see if he'll let us take it before your Council of Elders and these Kournan ambassadors."

"You'll do fine. Just keep your voice up, make your accusations very simple, and show them the evidence we've collected. What could possibly go wrong?"

"Varesh not involved, my bonny blue.... Kahyet is a pawn and nothing more, and behind every pawn is a guiding hand. General Morgahn's too trusting, if you ask me."

"Praying to Dwayna is all well and good, but I prefer a nice festival of Lyss, [sic] myself. Brilliant lights, dancing girls, and plenty of food and drink for everyone. Now THAT'S prayer!"

"Well, that was... nice. I could have done without the monsters. Still, we need to talk to the Castellan again and see if there's anything else to be done before we leave with Kormir."

"Oooh, ancestral spirits. Wait, is Tahlkora shivering? Is that some sort of Elonian tradition to honor the dead?"

"Blessings, spiritual guidance, check. Sheer firepower... not so much. Hm."

"For Istan and for Cantha!"

"I heard the others talking. They don't think you can find a place to protect all the Sunspears. Let's prove them wrong."

"I wonder what these caves were used for before the corruption. Corsair hideout? Monster lair? How interesting."

"You really think we can get Koss out of that Kournan garrison? I suppose if we take the right spells, bring a few hundred soldiers... what, no soldiers? Spells it is, then!"

"We did it! They thought it impossible, but the joke's on them. Let's finish the job!"

"Are you sure we can get through this? I'll have to trust your leadership on this one, my friend!"

"Warmarshal Varesh has no idea how much trouble we're going to cause her. Oh, yes, I can feel my spirits lifting already."

"Vabbi? I've never been to Vabbi. What should I bring? What are the well-dressed Elementalists wearing these days?"

"We should head to the Sunspear Sanctuary and find out what the gossip is there."

"I was told that once that [sic] Kournan work camp was once a sprawling estate. How tragic to see it turned into something this vile."

"Jahai Bluffs? The monument to Palawa Joko's defeat? I hear the place is haunted. It will make for an enjoyable visit."

"We're committed now. Listen to the Master of Whispers; he knows what he's doing."

"I have friends in the priesthood of Lyssa back home. I should write them of this."

"A party in Vabbi! Keep your ears open. These princes gossip like old housewives."

"Perhaps we should bake a cake with the word "TRAP" on it and bring it along. It's never a good idea to go visiting empty-handed."

"We have to warn Kehanni!"

"The Hidden City of Ahdashim. I like the way that sounds. Dark and mysterious. Maybe it's something wonderful..."

"I heard Koss and Melonni talking. It wasn't their usual run-off-the-mill-fight, so I think they're getting along again."

"Tahlkora is amazing! And to think, just a short time ago, she was a scared little girl."

"The Forum Highlands isn't a very good place for earth spells. The stone's too soft. Then again, if I had to listen to all those Vabbians talk for years on end, I might go a little soft in the head, too."

"Isn't there something we were supposed to do in the Marga Coast?"

"Poor Melonni! But...the Garden! Oh, such a tough decision. I hate these kinds of things."

"Zerai again. He always sends us all across creation. I wonder how many places we'll visit this time before we're done?"

"I've never had second thoughts about being a Zaishen, but Palawa Joko wasn't in the contract!"

"Hmmm. Joko's Domain. Well, that could be snappier. Joko's Towering Palace of Doom!"

"No matter how much creativity you put into it, a wurm is still a wurm, and I think the best thing for them would be some orange sauce, a little cinnamon, and a stiff dose of fire."

"Varesh is bad, but Palawa Joko really gets under my skin. Until skale figure out how to get rabies and communicate zombie-disease, Palawa Joko's going to be the scariest thing in the world."

"Which is worse: to be eaten by these creatures, or trapped in this terrible place? I can't decide!"

"This place is like my worst nightmares...the ones inspired by those little pickles."

"Ssssh. Be quiet. I thought I saw movement over there, behind those rocks. Abaddon is everywhere..."

"It must be horrible to be one of those lost Sunspear scouts. To be totally...alone."

"Shiro the Betrayer! I can't think of anyone else in Cantha whose soul deserves eternal torment more than his."

"I look forward to exploring more of Elona... now that it's not about to be eradicated by Nightfall."

Idle quotes that appear to be independent of the storyline:

"Are you kidding me?"
"Balthazar shall smite you!"
"Burn 'em down!"
"Call, fire! Summon, wind!"
"Did you see that?!"
"Free the elements! Scorch the ground!"
"I can handle this!"
"I've never cast this before. Hang on!"
"Oooh. That's a good one!"
"That blew up good. That blew up REAL good." (paraphrase from a Second City Television comedy skit)
"The power of the elements is at my command!"
"That was the best fight ever!"
"Whoa! That had to hurt!"