Olias used to take his marching orders from the White Mantle, but he now walks his own path. An encounter at the Temple of Ages [sic] convinced Olias that he had been chosen for a special mission: he now serves as Grenth's personal "hand of judgment," enacting what he sees as the will of his god. He lives by a simple code. Those who perish and return to life are expected by Grenth to live their lives well. If they do not, Olias ensures they are returned to the cold embrace of the Lord of Death.

Mysterious events in Elona now compel him to act on Grenth's behalf. With strange disturbances in the land, Olias feels that the gods are threatened and the dead themselves are uneasy in their eternal sleep. He has sworn an oath to Grenth that he will find the source of the strange malady and correct it. And if it involves sending new minions to Grenth, so much the better! Death and killing delight him. He is willing to discuss other matters, but strangely enough, most discussions seem to lead back to death and killing. 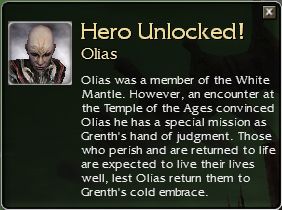 To recruit Olias for PvE, complete All for One and One for Justice, which can be obtained from Dinja in the Consulate Docks. Your account must include both the Prophecies and Nightfall campaigns. Olias will join the party at Level 15.

You can use Balthazar faction to unlock him for PvP, but there are currently no PvP arenas that allow heroes.

10 Blood Magic, 9 Death Magic (16 Death Magic in hard mode, during the quest All for One and One for Justice), 5 Soul Reaping

Olias starts with a basic necromancer armor labeled as Krytan Armor, although it actually appears to be undead Shing Jea Armor. The armor rating ranges from 45 to 60, depending on his level.

The appearance of his armor can be upgraded to Mysterious armor using Mysterious Armor Pieces acquired from the Shadow Nexus Challenge Mission.

The appearance of his armor can be upgraded to Primeval armor using Primeval Armor Remnants acquired in the Domain of Anguish and during the Ebony Citadel of Mallyx mission.

"To ponder life is to ponder death. One cannot exist without the other."

"By Grenth's blessing, you succeeded where another would have failed. Remember his part in all this, hero, and praise him even as you are praised"

"Do not fear death. Revel in it. For, no matter whom you are, Grenth is coming for you. Look forward to that day."
"I am ready to meet Grenth. Whether Grenth is ready to meet me... that is the real question."
"I like the look of agony. That perpetual shriek. That twisted fear in the eyes. It's the one emotion I can read on a man's face and know for certain to be true."
"Istan? Who cares, really? All we're doing is putting off thousands of deaths for a short while. Surely there's a better use of our time."
"People who live deeply have no fear of death."

"Grenth opens his gates this day to friend and foe alike."

"I pray for the souls I take. I expect to meet them again."

"Come now, what use is fear? Painfully or peacefully, all doors of death lead to the same place."

"Those sentry traps are ingenious. Think what one could do if fueled by a true will to destroy."

"Those Sunspears who survived were not the lucky ones. They will have to face a long war against the Kournans, filled with much pain. Death, like surrender, is often the gentler path... but it is not the best one."

"Centaurs have a similar bone structure to Charr, actually. Their spine is slightly curved, easy to shatter if one knows just how to strike. I look forward to dealing with them."

"We see what holy mission Grenth has set before us."

"I do not trust these corsairs, but I also do not worry. Grenth reigns supreme on land and sea."

"Demons. Immortal creatures of darkness. They do not have any fear of death...but they will."

"These corsairs we're to meet in Pogahn Passage. Tell me, are any of them Necromancers? Professional courtesy, you know."

"Hm. Yes. I'd say Vabbi has a great deal to offer a man like me. So does Kourna, given Varesh's predelictions, [sic] but I'll stick with what I know."

"Good luck at the party. Dissect someone for me, won't you?"

"Varesh has inhuman troops? Let us see how they die."

"The Hidden City of Ahdashim? Oooh. Sounds like a tomb. I couldn't be so lucky...could I?"

"The White Mantle once had to defend their citadels against such an enemy. Many died on that day. I look forward to those inevitable parallels to our own situation."

"Such a great library. Such a worthless section on death. Where are the books on anatomy? Dissection? Eviceration? [sic] Bah."

"Varesh picks the Temple of Lyssa for her dark deeds? Coward. Had she chosen Grenth, she would have found herself with a real challenge on her hands."

"Never let them tell you that death is the end of your struggle. It is the beginning."

"Melonni's nightmares are worsening. I tried to offer her a bedtime story to help her sleep... something cheering, like Grenth's parable about vivisection... but she turned me down. I can't imagine why."

"The rift between this world and the Mists widens. Grenth will be very busy, very soon."

"The Desolation is a wasteland. A dark, terrible place where bleached bones provide the only break in a featureless desert terrain. My kind of place, really, except for the wurms."
"Centaurs again? Excellent. I never did manage to finish my study of their disembowlment [sic] techniques."

'"Those larger wurms give me pause. I've never killed one before. While ordinarily that would be inspirational, in this case it's a bit daunting."

"Being in the belly of that wurm gave me a great deal of time to think about my own death. Very pleasant. I'd recommend it for anyone."

"Varesh's plan will not wait for us to plan every detail to distraction. We must hurry, or we will be too late."

"Be prepared. These lands take a toll on us simply in being with them. We must remain aware, or we will fail."

"Poor Kormir. Her soul did not escape to Grenth's gentle ministrations. A pity. He would have been kinder to her than this terrible realm."

"Grenth is my balance, my beginning and my end. His scythe shall bear me home."
"There were White Mantle in that river, souls who barely remembered the teachings of Saul D'Alessio. Would that I could have reached them, spoken to them, given them hope of the afterlife that waited if they would only reach for Grenth's hand...."

"So close to our goal...Varesh is dead, the Margonites scattering, and Abaddon's power is at hand. Only a few more steps before sweet death can take us to a well-deserved rest."

"Kormir will guide us. Have faith in her."

"I feel the power of Grenth rushing through my veins, as strong as the day I died. Abaddon stands no chance at all, my friend. Let us face him, and rejoice! Live or die, we will face a god unafraid."

"Abaddon is dead. And I assure you, Grenth will not make the mistake that the other gods did. We will not hear from Abaddon again in this lifetime... or the next."

Quotes that appear to be independent of the storyline:

"Another soul to shatter on the altar of Grenth!"
"At last. Someone to kill. It was getting so tedious."
"Cry me a river, child of angst!"
"Death is a lover. Embrace the love."
"Do you prefer the quick death of the coward, or the long, slow torture of a brave man?"
"Know wisdom. Know suffering. And kill them both."
"Most enjoyable."
"Scream for me, little one. Scream..."
"Some people just don't get the point... until you pierce their heart with it."
"The blood on my hands is an offering to my Master."
"They say killing is wrong. Perhaps they just aren't doing it correctly."
"This is the last dance. The walls crumble around you."
"To fear defeat is to invite it."
"Why should I fear death? I know the man."
"You do not have the strength to send me back to my Master. But feel free to try!"
"Your time has come."

Anomaly.Olias uses the quote "Most enjoyable." both as a battle quote and as a storyline quote during To Kill a Demon.