While the war between the White Mantle and the Shining Blade tears apart her Krytan homeland, Livia risks everything to keep her people safe. She joined the Shining Blade to protect them; she killed to defend them. Now freed from the control of the deadly Mursaat, Kryta struggles to survive, its leaders destroyed and its population beset by civil disorder.

Tasked by her superiors with finding a way to end the civil war, Livia has traveled into the Depths. She seeks a weapon of power—anything that will keep Kryta safe. And she is willing to give her life for it... as well as the lives of those around her. 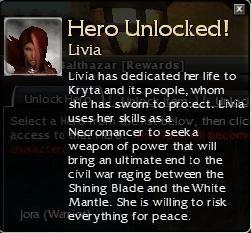 Livia joins your party upon completion of Finding the Bloodstone.

During The Battle for Lion's Arch

Livia starts with necromancer armor labeled as Shining Blade. Like most heroes, her headgear is hidden. Her armor has an armor rating of 60.

The appearance of her armor can be upgraded to Brotherhood armor using Cloth of the Brotherhood acquired from the Glint's Challenge challenge mission, or to Deldrimor armor using Deldrimor Armor Remnant acquired in the Slavers' Exile from killing Duncan the Black.

"The importance of this mission to the Shining Blade cannot be stressed enough. We must all make sacrifices."
Epilogue
"You survived. I'm pleased. When I return to Kryta, I shall say that heroes still exist in the world. But first, there is another place I must go... a little city called Arah..."
Shining Blade Camp
"We meet again, under dire circumstances and against impossible odds. Just as I like it."

"Good to see you again, Livia. Always in the thick of things, aren't you?"

"You could say that, but in this case, it is my love of Kryta that brings me here and not my need to be "in the thick of things". Princess Salma has my undying devotion."
Divinity Coast (explorable area)
"If you thought the Asura were only spiteful to other races, you haven't witnessed any disputes over golemancy or power cores."
During the Battle for Lion's Arch
"We're going to get bloody on this one."
Lion's Arch (War in Kryta)
"Bartholos has stepped down as leader of the Shining Blade so he can serve the queen in a more public capacity, and Evennia has gone missing in Ascalon. I am, reluctantly, assuming leadership over the Shining Blade. While Queen Salma has claimed her birthright and taken the seat of power in Kryta, there are still dangers I fear we will face, and I foresee the Shining Blade playing a crucial role in the dark days to come. But I digress; this is a day of celebration. Thank you, my friend, for everything you have done for us."

"Every man I meet wants to protect me. I can't figure out what from."
"I generally avoid temptation... unless I can't resist it."
"I may work for the Shining Blade, but I'm not like Evennia. I'm not pure and I'm not kind. I used to be shining... but I got tarnished."
"There's nothing like a love song to give you a good laugh."
"Why do I fight so hard for Kryta? You might as well question why I breathe. If I stop breathing, I'll die. If I stop fighting my enemies, my world will die."

"Die first. Serve after!"
"Evil is obvious, but only in retrospect."
"I hate an enemy that dies easily. The least you could do is make it interesting."
"I have the perfect weapons right here: your body, your soul. Both can be convinced to work against you..."
"I'm not a bad person. I just know what I want."
"I've killed a lot of people. Don't take it personally."
"Kryta! For Kryta and the Shining Blade!"
"Necromancy's just another way of asking someone to stick with you. Whether they want to or not."
"The best goodbyes are like a knife in the dark: short, simple and to the point."
"The dead are often happier that way."
"This world's a hell. It only gets worse when you give in to it."
"You call that fighting? It is to laugh."
"You're the bottom of the barrel, love, and I'm scraping it."
"You're very lucky. Scars are sexy."