Offer protection to the weak. Give solace and shelter to those who need it. Be ye a salve to the wounded.

The Shining Blade is a group of Krytan royalist rebels who oppose the expanding rule of the White Mantle over Kryta and support the reinstatement of the Krytan royal line. They are suspicious about the motives and true intentions of the White Mantle and their gods, the Unseen Ones, striking out at the Mantle from the Maguuma Jungle using guerrilla tactics. When they were formed is unknown, but they were originally led by Evennia, with an inner council which held at least Saidra and Markis.

Spoiler alert: The following text contains spoilers relating to the story of Guild Wars Prophecies, Guild Wars Eye of the North, and Guild Wars Beyond. 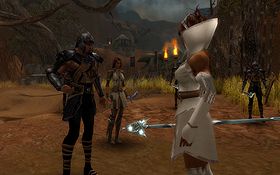 In 1072 AE, Evennia recruited the aid of Ascalonian adventurers and orchestrated the occupation of the Henge of Denravi, the theft of the Scepter of Orr, and gaining the aid of Vizier Khilbron in return for the Scepter. However during the exchange the Shining Blade were betrayed by Markis and captured, killed, or scattered into the Southern Shiverpeaks. Evennia and Saidra both were captured and intended to be killed on a bloodstone within the Shiverpeak Mountains.

After the freeing of Evennia, and the death of Markis, the Shining Blade and the Ascalonian adventurers set out for the Ring of Fire Island Chain to open the Door of Komalie, which they were told by Khilbron would unleash a weapon to destroy the White Mantle's lords.

After the defeat of the Mursaat, Evennia stepped down to serve the new princess Salma and gave Bartholos leadership of the Shining Blade, who continued the conflict against the Mantle while aiding Salma in reestablishing the monarchy. In order to gain the upper hand, they contacted the Asura Gadd, in the hopes of gaining aid and weapons against the White Mantle. However, in 1078 AE, the Shining Blade become embroiled in the Asuran plan to stop the Destroyers, eventually aiding in the defeat of the Great Destroyer, before returning to the Krytan civil war.

A year later, the Shining Blade established a new camp in the Talmark Wilderness, where Salma began a march on Lion's Arch to retake the throne after recruiting the help of Zinn and Blimm, as well as the Ebon Vanguard. They managed to take the keep without a single drop of blood being spilled. Afterward, they launched a series of assassination operations against White Mantle Inquisitors, and then against Mursaat survivors who became directly involved in the war. After the death of Koril the Malignant, the Shining Blade were forced to defend Lion's Arch in a final battle as Mantle forces marched from Demetra.

After a long battle, the united forces of the Shining Blade, Lionguard, Ebon Falcons, Zinn, and Blimm were victorious. Several days after the victory, Salma issued a public proclamation that the Shining Blade would serve as her royal guard under the leadership of Livia, while Bartholos was appointed to lead the newly formed Seraph. 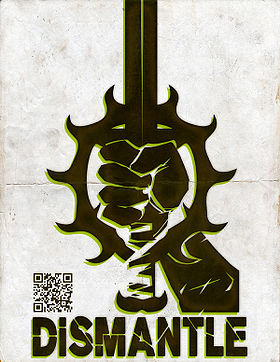