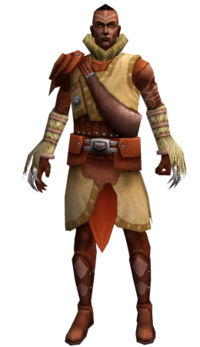 The Lionguard is the traditional force protecting Kryta and the Krytan royal family. Due to King Jadon fleeing the throne during the Charr invasion, the Lionguard had been replaced by the White Mantle as the primary protectors of Kryta. During the White Mantle's reign, the Lionguard's power has been slowly diminishing with their tasks constantly overseen or taken by the new order. The Lionguard is mainly relegated to simple peacekeeping and guard duty inside and around Lion's Arch, the last location they control.

The Lionguard hold to the old traditions of Kryta and refuse anyone but themselves to hold weapons within Lion's Arch, which often causes friction with the White Mantle. There are also many Lionguard who dream, and even work toward, returning the group to its former glory, including making moves to re-establish the royal family.

The Lionguard held a minor, but important, role during the Krytan civil war. They had kept Lion's Arch under control until Princess Salma led a march to the city and retook the throne. Being loyal to the royal family, the Lionguard joined the Shining Blade in fortifying and defending Lion's Arch before and during the Battle for Lion's Arch.

Their current leader is Firstwatch Sergio. The leader before him had allowed the reputation of the Lionguard to falter.