There are two types of humans in Kryta: those who worship the mysterious Unseen Ones and those who do not. The worshippers have become known as the White Mantle because of the long white sleeveless robes many of them wear.

The White Mantle maintain a series of temples all over the continent. Members of this organization frequently, though not always, choose to reside in these temples to better perform their duties to the Mantle and to more effectively worship the Unseen Ones.

Since the end of the last Guild War and the repelling of the Charr invasion, the White Mantle have maintained a high level of military preparedness. They don’t ever want to be caught off guard again, and they often keep large stores of weapons inside their temples to use in case of emergency. It’s also not uncommon for followers of the Mantle philosophy to be highly trained warriors. Fighting skills will come in handy if the day comes when they will need to once again defend Kryta from invasion.

The White Mantle is a theocratic paramilitary order and is a governing body of Kryta.

The White Mantle were founded during the Third Guild War, no later than in 1067 AE (though exact year is unknown), by Saul D'Alessio. A drunkard and a thief, he was exiled from Kryta and found himself in a dense forest, three weeks' ride away from Kryta. On the brink of death, he instead found the Unseen Ones — tall angelic beings of light who nurtured him back to health and returned him to a leaderless and besieged Kryta. Such was his sincerity and inspirational ability that he gathered a small group of followers, who would become known as the White Mantle. During the Charr invasion after King Jadon fled the throne, Saul and the White Mantle managed to turn the tide of the war against the Charr, sneaking into their camp in the dead of night and assassinating their leaders.

According to official Mantle records, Saul was killed in an ambush during the Charr retreat. However, his legacy lives on in his successor, Confessor Dorian, and Justiciars Hablion and Thommis, who took command of the Mantle after his death. Under them and the Inner Council, the White Mantle ruled over Kryta for the following years. They continued to spread the teachings of their gods at the behest of Confessor Dorian. They have even sent an ambassador to Ascalon to further their teachings in other lands.

The White Mantle hold an annual Test of the Chosen, administered by would-be justiciars and zealots, to find Chosen recruits and take them to the Temple of the Unseen to train under the Grand Masters and ensure the strength of the Mantle endures - or so the White Mantle claim.

In 1072 AE, they began to fight the undead Orrian forces when they threatened Kryta. Alongside the undead threat, the White Mantle were assaulted by rebels who resist the White Mantle's rejection of the Old Gods and supported the reinstatement of Kryta's monarchy. Many of these rebels gathered together to form the Shining Blade, a group that used guerrilla tactics to strike out against the Mantle.

Spoiler alert: The following text contains spoilers relating to the story of Guild Wars Prophecies, Eye of the North and Beyond. 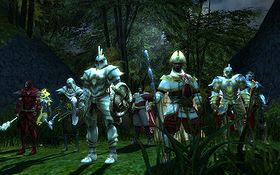 The founding members of the White Mantle.

When Prince Rurik led the Ascalonian refugees over Shiverpeak Mountains, they were granted settlement in Kryta by Justiciar Hablion in return for aid against the undead blight. After repelling undead forces from the Temple of Tolerance and retrieving the Scepter of Orr, several of these refugees were made honorary members of the Mantle and picked to administer the Test of the Chosen, selecting those with the magical aptitude to be sent to the Temple of the Unseen.

However, the chosen were kidnapped by the Shining Blade and the Ascalonians were sent to retrieve them. Upon finding them, they discovered the Mantle was in fact performing ritual sacrifices of the chosen atop the bloodstone — sacrifices which, by the time of completion of the Flameseeker Prophecies, were said to number in the thousands. Justiciar Hablion was slain, the refugees joined the Shining Blade, and Kryta was plunged into civil war. The Mantle began a purge and the Blade's leadership fled to the Southern Shiverpeaks, pursued by the Mantle and their Unseen gods, now revealed to be the sinister Mursaat.

In the Shiverpeak Mountains, Confessor Dorian was slain by the Blade, who were taken to the Ring of Fire Island Chain with the help of King Jalis Ironhammer, where the White Mantle Inner Council were also killed. There, they were tricked by Vizier Khilbron into releasing the Titans, who began a rampage across Tyria, defeating all but a few of the Mursaat.

The White Mantle are a notable group of antagonists in Guild Wars Prophecies.

After Dorian's death, Confessor Isaiah assumed command of the White Mantle, but without their unseen gods, the Mantle has since struggled to maintain a grip over Kryta, especially with the reemergence of the Krytan royal line in the form of Salma.

To maintain their grip over the population, the Mantle created new laws to prevent free movement and create a police state, even going so far as to enlist mercenaries to enforce these new laws. Support quietly grew for the Shining Blade as Peacekeeper thugs and the White Mantle inquisition terrorized the citizens of Kryta.

The tide of the war began to turn after the crown retook the Lion's Arch Keep. Princess Salma directed assassinations of high-profile Mantle targets, including Inquisitors Lovisa, Bauer and Lashona. Even the direct involvement of the surviving mursaat was not enough, after she arranged to wipe out their forces at Shaemoor, the Temple of the Unseen, and the Temple of Tolerance. Meanwhile, Mantle forces gathered in the village of Demetra, where their order had been founded, ready to strike in a final battle.

The Mantle forces swept across the Krytan countryside, burning villages and killing any villagers in their path. Led by Confessor Isaiah and High Inquisitor Toriimo, the Mantle gathered at the gates of Lion's Arch, ready to strike. The gates were opened, and arrows rained down on the Mantle forces from the bluffs, beginning a long and difficult battle. Finally, the Confessor was slain, and even waves of jade constructs were unable to overcome the resolve of Kryta. Eventually, allied forces, under the direction of Bartholos, won the Battle for Lion's Arch, breaking the White Mantle, and establishing Salma as Kryta's new monarch.

After their unsuccessful attack, most surviving Mantle forces had split into two groups: one group sought to hide themselves in the Maguuma Jungle and the others defected to the newly-formed Seraph. Analysts currently doubt that they will pose a credible threat again for a long time. 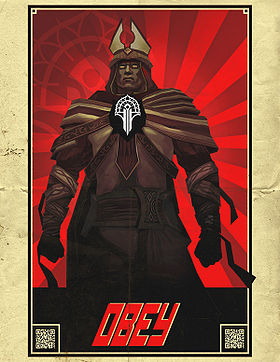