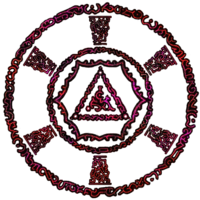 The bloodstones are five shards of a massive stone created by the Gods of Tyria and sealed with the blood of King Doric. They broke the stone into five pieces. Four of these pieces represent the four schools of magic (aggression, destruction, preservation, and denial), and the final piece, the Keystone, was needed to reassemble the Bloodstone. The five pieces were then tossed into the volcano, Abaddon's Mouth. Later, following an eruption, four of the pieces were spread across Tyria, while one remained on the Ring of Fire Island Chain, near the caldera.

At least two of the bloodstones are used by the White Mantle and Mursaat to sacrifice the Chosen. When slain, the Chosens' souls are channeled into the soul batteries - structures created by the Mursaat to keep the Door of Komalie, and ultimately the Titans sealed away.

Two of the three found bloodstones hold inscriptions, which are also on some doors and seals in the Bloodstone Caves. Each inscription, however, changes slightly between the three locations.

Anomaly.Glint mentions that if a Chosen is killed on top of a bloodstone, "no magic on this world or any other will bring them back.", but the player character will be resurrected as usual if the event occurs.