A: After completing the Primary Vanguard Quests in Eye of the North, go back to Gwen in the Hall of Monuments with one of these items in your inventory and Gwen will give you the quest "Then and Now, Here and There". The items will disappear if you accept the quest.

A: Tapestry Shred can be also used for Then and Now, Here and There quest as well.

A (partial): We have not seen any female Charr (The Ecology of the Charr, PC Gamer Ultimate Guild Wars Guide).

Q: Is there any way to tell the difference between male and female Asura other than their voices?

Q: We already knew how Shiro became corrupted. What about the Vizier? What was his history?

A:The bloodstone found in EotN is the Shiverpeaks bloodstone, being in the mountains.

Q: Are there plans to visit Orr in the future? According to Blade Operative Paulina there were a few Orrians who were travelling during the Cataclysm, will we see any of them?
A: Maybe and maybe. Can't speak definitely about future plans/unreleased content. Patience. :D -

Q: Many afflicted bosses have names that match some Shing Jea NPCs. Just coincidence, or are they supposed to be afflicted students? What about the ones that don't match the students' professions?

A: The bosses were named after NPC's to flesh out the portion of the plot that says that Shiro is using the plague to transform people into the plague creatures. For the ones who change profession when afflicted, I assume that they matched at one point, but one of the NPC's had their profession changed for other reasons(elite skill distribution, etc), and the other NPC did not get updated. Andrew McLeod 19:20, 14 September 2007 (UTC) 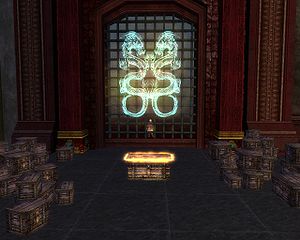 Q: What is special about the glowing chest near the Xunlai Storage area in Kaineng City?

A: The glowing Xunlai chest is in the "Xunlai headquarters", and is supposed to be the magical chest that really holds everything that people store with the Xunlai. I was the designer who spawned the NPC's in Kaineng Center, and while I was doing it, I was informed that this section of the town had been designed with that in mind. Andrew McLeod (Freyas) - ArenaNet creature designer 09:35, 16 July 2007 (UTC) [copied from this page.]

Q: Where is the tunnel the Dredge made to go to Cantha? Is that huge hole in the west side of Arborstone where Dark Fang lurks?
A: I don't know where the tunnel is, but the hole in Arborstone sure doesn't look like it leads to Tyria... maybe some day we will get to see the tunnel, but I don't believe we have yet. -

Q: The Suspicious Hermit in Zehlon Reach, what is he doing there? Was he part of an abandoned quest?

A: The suspicious hermit was indeed part of a quest at one point. He was part of the quest A Father's Fate which was one of the first quests written by a new designer after he was hired on about half way through NF production. Since he was new to this kind of game design at the time, the quest itself was pretty broken spawn wise (it dun wurk) and clunky story wise so we decided to split it up and rework it to something that made a little more sense. Linsey Murdock 22:01, 5 July 2007 (UTC) [coped from this page.]

Q: Does Bahltek have a further role in this game, apart from being a big enigma in Nightfall?

Q: Was the creature defeated in A Time for Heroes the real Great Destroyer? If so, what was the creature at the end of the Ogden's Benediction cinematic?

Q: What kind of being is the Great Destroyer? Is it a god of some sort, a term for the leader of the hive mind that the destroyers seem to have, or something else? Both the Great Destroyer and the Great Dwarf seem to fall outside the list of mortals and gods and into another category.

A: You do fight the Great Destroyer but the idea is that it is just the least of your worries, which I think we communicated fairly well. This is a foreshadowing of what is to come in GW2. Linsey Murdock 17:39, 4 September 2007 (UTC)[coped from this page.]

A: The creature seen at the end of the cinematic is Primordus.

Q: In the Scriptures of Abaddon, Jadoth is called the first of the Margonites, however the events in question take place in 1 BE, and the timeline mentions that Margonite civilization was already well established in 175 BE. Does this mean that Jadoth was already transformed into a Margonite centuries earlier, or do earlier mentions of Margonites refer to humans also called Margonites, with Jadoth being the first transformed Margonite? What about Turai Ossa's statements regarding the Margonites in Thirsty River? Are they misinterpretations on Turai's part or do they refer to a group of Margonite outcasts like the Apostate and The Lost?

A: The Margonites were once much more human than they are now. Their current state is due to the corruption of Abaddon. Any mention to humans called Margonites would be mention of the same creatures you see in Nightfall but before the taint of Abaddon has touched them. -

Q: Did Dhuum somehow survive has alleged destruction at the hands of Grenth, or is he some kind of ghost? Is he still a god?

A: I've been told that Dhuum has been knocked down, but he can get up again. Again, I have no additional details. --

A: Dhuum was imprisoned in the Hall of Judgment.

Q: Many legends claim of at least some of the Gods of Tyria creating the world. Is this true?

A: They did not create the world, but only arrived after the Elder Dragons' last rise had ended. They had terraformed the world after, to a degree at least, however. (sources: gw2:Orrian History Scrolls, gw2:Cathedral of Silence (story), gw2:The Ruined City of Arah (explorable))

Q: What are the watchtowers along Watchtower Coast, Riverside Province and Beetletun protecting against?

A (partial):For your first question, I was told that the giants could be Norn, but I don't have any more details to give on that topic. --

Where did humans come from?[edit]

A (partial): "The full story of the origin of the humans has yet to be revealed. They arrived in the Tyria (the continent) sometime after they first appeared on Tyria (the world). It seems, from their previous appearances, that they have come up from the south, so the “human homeland” may be further south than Elona and Cantha." - Jeff Grubb [copied from here]

Q: Where did the door in the north-eastern corner in Barbarous Shore lead to?

A:That particular door actually does/did have a lore purpose and wasn't just something that lead to a area which was cut. That door leads to a way around the Kournan lands up to the borders of Vabbi. - Image:User Linsey Murdock sig.jpgLinsey talk 06:00, 12 January 2009 (UTC) [copied from here]

Q: What is behind the gate Rotscale guards?

Q: What exactly are the Seers? Where do they come from?

A (partial): They're of Tyrian origins and one of the oldest known races. (source: gw2:The Ruined City of Arah (explorable)