This article is about a mission. This name is also used for an outpost, an explorable area during the War in Kryta, and a Zaishen mission quest.

Riverside Province is the southernmost Krytan province, an area with major Krytan settlements surrounded by marshland. The White Mantle have a heavy presence due to their major base, the Temple of the Unseen being located here. Getting past them will be no easy task, and undead invading the swamps won't make it easier.

Any character can simply walk into the outpost from Twin Serpent Lakes and start the mission. Passage Through The Dark River also brings you here, but other party members will be left behind.

Steal the Scepter of Orr.

This mission can be done without fighting much of anything by avoiding enemies or running past them. The first half is guarded by undead for the most part. All nine of the towers can be completely avoided by having one person walk up close. This will have the effect of the watchtower guards calling the other troops in, allowing your party to sneak by on the outside. When you reach Dinas you will get the Scepter of Orr and there will be a cut-scene. Open the nearby door and follow the path to the northeast. Eventually you will reach a boss blocking a bridge. In theory you are supposed to kill it and run the Scepter of Orr across the bridge, but you can walk to the left of him and the cutscene will activate anyway.

The bonus is quite a different story. Instead of sneaking around the entire White Mantle, the bonus requires defeating the guards in the towers. First, you need to defeat the enemies on the first tower (1). Then head southwest and talk to Saidra (2). She will speak of a need to allow supply trains to slip through the area, which requires the towers be neutralized. There are nine towers in all (positions 1 and 3), each with about a dozen White Mantle guarding it.

There are a couple of stationary enemies in front of each tower, but the watchtower guard will sound the alarm as you approach, causing all nearby White Mantle to return to the tower. To counter the reinforcements, start by setting your team back from the tower (e.g. by flagging party NPCs). Next, send in just one character to trigger the mantle, back away a bit, and wait for the troops to begin dispersing. Pull just a few mantle at a time, defeat them, and repeat until you are left with just the stationary troops.

The guards are not within your line of sight, so you usually cannot hit them with projectiles or projectile-based spells. Melee characters can sometimes attack the guards through the doors of the tower; however, they are easy prey to non-projectile damage (e.g. via many caster skills): while you hurt them with health degeneration or non-projectile skills, they will have trouble doing any damage to your party. 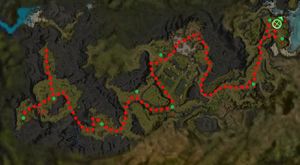 Do not cross the bridge with the Scepter until you receive notice that the bonus has been completed.

Consider completing the bonus before going to collect the sceptre, as it leaves you with a very clear run to the bridge.

Before taking out the first tower[edit]

Saidra: "You must be careful around these parts. The White Mantle see everything from the tops of their watchtowers."

After taking out the first tower[edit]

Saidra: "My friends. It is me, Saidra, in disguise."
Saidra: "On the other side of this gate there is a cart of weapons waiting to be smuggled to the Blade."
Saidra: "But I can't get them past the watchtowers without being searched."
Saidra: "If you take out all the towers between here and the docks, I'll be able to sneak through."

Saidra: "You must be more discreet. If the Mantle see you talking to me, they may become suspicious."

White Mantle Justiciar: "Listen up, there's talk of raiders on the prowl. If you see any, they are to be terminated on sight"

South of Temple of the Unseen[edit]

"My friends, it is good to see you again."
"I didn't think when we met off in D'Alessio Seaboard that I would be giving you the Scepter of Orr."
"Come, you must not linger here.The Zealots will be back soon."
"I will show you the quickest escape route."
"To the east is a bridge that will take you over the Ullen River to safety."
"Stay off the beaten path, and whatever you do, avoid the watchtowers!"
"Many men have died for this. Guard it with your life."

Anomaly.Unlike other Prophecies missions, chests do not appear during this mission.

Anomaly.To complete the bonus objective, only the Seekers in the towers need to be killed even though the bonus text suggests that the Watchtower Guards must be defeated.
Retrieved from "https://wiki.guildwars.com/index.php?title=Riverside_Province&oldid=2678923"
Categories:
Hidden categories: