Sneak out of Nolani Academy and destroy the besieging Charr. Help Rurik push to Rin and sound the horn Stormcaller.

Return Prince Rurik south of the Wall to safety.

The goal of this mission is to return south of the Wall, back to the safety of Rin, beyond the Charr horde waiting both in the passage in front of Nolani Academy and behind the Wall. Prince Rurik will remain behind the gate in the starting area while players sneak out through the back door and ambush the Charr forces from behind. To perform this task, players will head south to the Wall and then loop back to Nolani Academy again. (Technically the lever could be used to open the gate, but that would give access to Nolani Academy to the Charr army and it's not recommended. High-level teams, however, can save a substantial amount of time.)

There is a lone Flaming Scepter Mage at the start of the mission, talk to him and he will follow and help you out. On your way to the Wall, you will also encounter allies (with Dual Shot), Warmaster Casana with an Ascalonian Ranger plus another three Lost Soldiers on the opposite side of the passage, near the Charr forces.

Clear the passage of Charr forces and Rurik will open the gate of Nolani and proceed to the Wall. Once there, a cinematic will trigger. 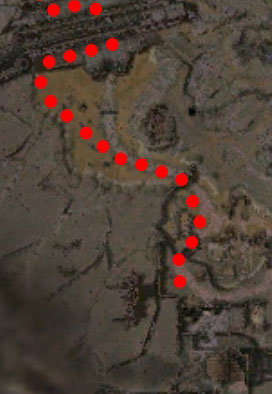 On the other side, Rin is found under attack. The only way to save the city now is by reaching Horn Hill and make use of the recently acquired Stormcaller. A second cinematic will trigger once there. Immediately afterwards, Rurik will rush forward in a desperate attempt to rescue Rin from several Charr invaders. Remember the Prince's death will cause mission failure. If you manage to save the Ascalon Prisoners, talk to them and they will follow you. The elementalist Charr boss Bonfaaz Burntfur will be standing at the very back of the ruins, kill him to complete the mission.

A high-level player with a hybrid running/fighting build can whizz through the mission in about 12-15 minutes. Simply bring a speed boost or two and a high-damage combo (preferably AoE) - the only necessary killing is the group immediately outside the Academy (pull the lever) and Bonfaaz Burntfur. Note that you have to go out the sneaky back exit for the bonus because Rurik is on a pre-programmed route and will not wait up - he will go to the Wall and activate the cinematic, then to Rin and activate Stormcaller.

The final battle against the Charr forces often results in Rurik's death (especially in Hard mode), mainly due to the large number of foes and the prince's suicidal tendencies. To avoid such a fate at the very end of the mission, players can use an alternative path that is completely clear of Charr and leads straight towards the last Charr boss Bonfaaz Burntfur, whose death grants mission completion.

The strategy consists of reaching the final boss before Rurik triggers Stormcaller's cinematic. After the first cinematic, instead of following him, turn west (right) and run south along the clear path (see wiki-map).

Avoid aggroing the mobs within the ruins of Rin and rescue the two Ascalon Prisoners under attack (just past the archway). Climb up the stairway and kill Bonfaaz Burntfur as fast as possible to complete the mission. 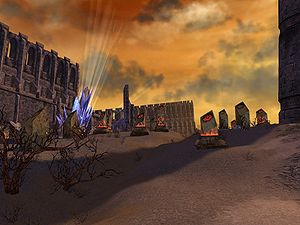 The bonus consists of returning the Tome of the Fallen (point 1 on the wiki-map) back to its pedestal at the graveyard (point 2 on the wiki-map), and can be performed before freeing the way for Rurik. Slightly close to the Wall, you will spot Watchman Pramas on your radar, who will then ask that you take the tome back to where it belongs.

Proceed to the Wall but instead of heading north towards Nolani Academy, head westwards and across the broken steps to find the graveyard filled with hostile Spirits of the Fallen. Do not engage too many at once since there are hidden devourer pop-ups on the cliff above. At the furthest west side of the graveyard, place the tome on the tome pedestal. An Old Ascalon Spirit will then appear; talk to him and do not leave his compass range until the bonus is marked as complete.

The party size is only four:

Flaming Scepter Mage: "As long as I control this OBELISK, [sic] it will strike any foes who venture near."

Prince Rurik: "The Charr archers have us pinned down. You'll need to sneak out the path to the east and ambush those Rangers. I'll stay here to help the mages hold the defenses. you must hurry. We can't hold out here for long."

Watchman Pramas: "I took the Tome of the Fallen from the graveyard. The captain ordered me. But I didn't know it was cursed! Now the spirits of those who lost their lives on the Wall are roaming free! Please. Take it back to the graveyard for me."

Warmaster Casana: "I got separated from my party on a scouting mission beyond the Wall."

Warmaster Casana: "I didn't think I'd make it back alive by myself."

Old Ascalon Spirit: "These spirits are at peace because of you. They gave their lives protecting the Wall. The story of our destruction was foretold long ago. Our names might as well have been written in the Flameseeker's Prophecies. Heed the words of the prophet. The sons of Ascalon must not die in vain."

After freeing the Academy:

Prince Rurik: "We push on, to Rin! Bring the mages. Their homecoming is overdue."

Prince Rurik: "Praise be to Dwayna if this works."

Prince Rurik: "Trumpets! The king must be near. The fall of Rin will have darkened his heart. Hail King Adelbern!"
King Adelbern: "Rise, my son. you have done well. The discovery of Stormcaller is surely a sign of victory."
Prince Rurik: "It is a powerful weapon, but I fear not powerful enough. The Charr have amassed an army of many thousands."
King Adelbern: "You overestimate these beasts, Rurik. Do not be afraid."
Prince Rurik: "I am not afraid, father. I have seen them in battle. Rin has been destroyed! It would be wise to escape while we can. We should make for Kryta and rebuild our strength. Not wait here for death."
King Adelbern: "I will never allow Ascalons to live in the shadow of the Krytans! It is Rin that will be rebuilt. And you will learn your place."
Prince Rurik: "You have grown proud, Adelbern of Ascalon...proud and foolish!"
King Adelbern: "You would dare call your king a fool? I will hear no more. I banish you from Ascalon! You are no longer my prince, and you are no longer my son!"
Prince Rurik: "People of Rin! Your king will lead you to death. If you wish to see better days, if you wish to live, then leave the beasts behind and follow me over the Shiverpeaks. We make for Kryta and a new life, free of the Charr."

Bug. If you choose to open the gate at the beginning of the mission, there is a small chance that

Bug. If you choose not to follow Rurik after opening the gate to Rin, he will avoid the Elementals and skip to cinematic 2.

Bug. If Bonfaaz Burntfur dies during cinematic 2 (e.g. due to degeneration), the mission will not end and your party will not be taken to Yak's Bend. The mission will register as completed, however (the map icon will update and you will get credit for your storybook). Additionally, if you wipe, you will not receive an option to return to the outpost, you will have to re-zone manually.

Anomaly. At the start of the mission, if a party member gets too close to the boss (and its group's spawning location), the starting gate will open after that group dies. Any remaining Charr near the gate will rush Prince Rurik, risking his death (and mission failure). To avoid this, avoid the spawn-point by pulling the boss group away, giving you a chance to kill the other two groups of Charr.