After a long hunt for the Shining Blade in order to rescue the Chosen, the heroes are in for a surprise ending.

Hunt down the Shining Blade kidnappers, and rescue the Chosen they have taken hostage.

You will encounter Entangling Roots through the trip. Approaching these creatures will trigger the appearance of a gate of ivy that cuts off frontline characters from the rest of the party while simultaneously triggering hidden spawns. Kill the Entangling Roots to open the gates.

At the junction, take the middle westward road (the same way White Mantle Knights go). Pay attention to Centaur patrols, unaware parties can aggro several of them and wipe. Their rangers leave Flame Traps and spirits of Symbiosis while moving - triggering the traps or attacking the spirit will guarantee aggro. Follow the map to avoid getting lost in dead ends.

After you have fought your way along the path trodden by the Shining Blade Scouts, protect the Chosen by eliminating the spider spawns.

The bonus requires that you defeat two Centaur bosses. Instead of following the White Mantle, head south after proceeding past the first Entangling Root. You will find two Centaurs talking to each other (point 1), do not attack them yet. To initiate the bonus, you have to eavesdrop on their conversation. After their dialogue finishes with the line "I will guard Ramtha Brokenhoof and Horm Frostrider with my life.", kill them. Pick up the Vine Seed that eventually appears by the glowing plants, which is needed to reach the two Centaur chieftains. You can drop the Vine Seed during combat, it will grow branches, knocking down adjacent foes and dealing 20 damage, and finally it will return to bundle form. Carry this item and backtrack to the middle road again.

After fighting the roaming Centaurs, take a detour again to the east (point 2). Place the Vine Seed over the round mark to form a bridge. Head South where you will find the two Centaur chieftains (point 3): Ramtha Brokenhoof and Horm Frostrider. You can use the high-ground advantage of the entry slope to pull separate groups of Centaurs. Beware confusion with two other bosses that may spawn (Rapa Ironhaunch and Kara Bloodtail/Tama Blessedhoof) close to your objective bosses. After killing Ramtha and Horm, the bonus completion message will display.

When coming into range of the first Shining Blade Scout.

Before reaching the first boss.

Before crossing the first bridge.

After crossing the first bridge.

White Mantle Knight: "It's no use. We are lost."

When coming into range of the Centaur Scouts.

When coming into range of the second Shining Blade Scout.

When coming into range of Ramtha Brokenhoof and Horm Frostrider.

When coming into range of the third Shining Blade Scout.

When coming into range of the fourth Shining Blade Scout.

For more information, see The Wilds (cinematics)
Captured Chosen: "Oh no. Please no."
Evennia: "You there! You can chase us through the jungle later."
Evennia: "But if you have even a shred of decency in your heart, I beseech you, help us save the Chosen."

<party leader>: "You have exactly ten seconds to explain yourselves before we run you through."
Evennia: "Perhaps it is you who needs to be doing the explaining."
<party leader>: "What are you going to do to us?"
Evennia: "I don't know what to make of you."
Evennia: "You're not typical White Mantle, as evidenced by your bravery and willingness to help save the Chosen."
Evennia: "Had you not shown up when you did, we might have lost them after all."
<party leader>: "Lost them? You weren't trying to get them killed?"
Evennia: "What did you think? That we liberated the Chosen from the murderous Mantle only to feed them to the spiders?"
Evennia: "Nothing could be farther from the truth."
<party leader>: "Then what were you doing?"
Evennia: "Rescuing them from the Mantle, that's what. The spiders were a...a miscalculation."
Markis: "I don't trust them, Evennia. They're Mantle plain and simple."
Evennia: "I can see that Markis. But something tells me if they see for themselves what the White Mantle really do with the Chosen, they'll have a change of heart about their masters."
Markis: "What are you saying? That you mean to let them go?"
Evennia: "Yes, Markis, that's exactly what I mean to do."
Evennia: "Who knows. Once they've seen the Bloodstone, they may end up being valuable allies."
Markis: "This is a mistake, Evennia."
Evennia: "Maybe it is."
Evennia: "If my hunch about you is correct, then you'll head to Bloodstone Fen."
Evennia: "The truth about the White Mantle will reveal itself. And you will be faced with a difficult decision." 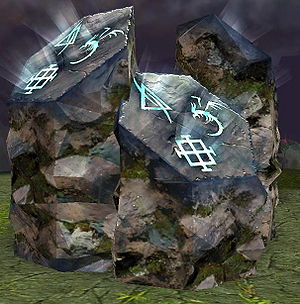 Bug.It is possible, that after destroying the last Entangling Roots in the Western most part of the mission, the ivy gate will vanish but still be impassable. If you ended up on the Western side of the ivy gate, you will be able to continue for a few steps but then hit an invisible wall. The mission cannot be completed either way.

Bug.It is possible, that after killing both Centaur Chieftains, you will not get credit for completion of the bonus objective. The bonus will have to be repeated in this case, although the mission can still be completed as normal.