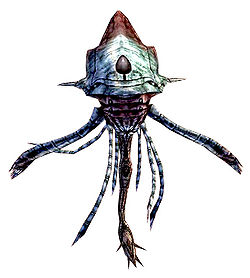 Riders are unnatural floating beings that can be found throughout Tyria and in the Fissure of Woe. The ancient power-mad mage known as Sybitha is said to have "unleashed" the Riders within the Crystal Desert, implying that the Riders may originate from the Mists. Erudine has been conducting experiments on them ever since they appeared after the Searing. They seem to be attracted to locations of magic, as they can be found in locations which have either suffered from magical events, have bloodstones, or show magical qualities.