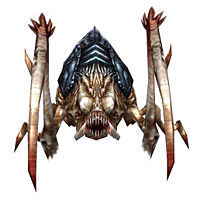 Scarabs are large four-legged insect like creatures found throughout Tyria in the Maguuma Jungle and Crystal Desert. Scarabs are attracted to areas of large deaths, indicating that they are carrion feeders. Some Scarabs are known to even devour souls.

During Wintersday, the Humbug, a kind of Scarab, assists the Grentches in their efforts to to aid Grenth.