Dunes of Despair is one of the missions required to achieve ascension in Prophecies.

Any character can simply walk into the outpost from Vulture Drifts and start the mission. 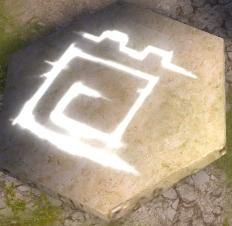 The rune in Augury Rock representing Dunes of Despair.

At the beginning, you meet the Ghostly Hero who asks you to help him reclaim his throne. During the mission, he will use Claim Resource to open any drawbridge gates. Speaking to him toggles his movement behavior between following and staying put: he will follow the player who spoke to him when he was in stay-mode and continue doing so until that player speaks to him again.

After he lowers the first bridge, cross the gorge. At the other side, you can continue south with the mission killing the mesmer boss Goss Aleessh and his cohorts to trigger a cinematic, or detour west to gain the Slow Totem (an optional tool) and come back. When dropped, this item creates a ward effect that slows movement of any foe passing through.

Aleessh's death triggers a cinematic, placing you near the next drawbridge; again, use the Ghostly Hero to lower it. You will now be attacked by Enchanted armors. To protect your ally, lead the Ghostly Hero back from the bridge and use the gateway as a choke point to fend off the incoming foes. If you have the Slow Totem, drop it slightly ahead of where the party is waiting. Now, the only foe left in sight should be the enemy Ghostly Hero at the Throne. Defeat him and have your Ghostly Hero approach to capture it and begin the last stage of the mission. You will have to protect him for the next ten minutes.

Again, if you have the Slow Totem, drop it in front of the Ghostly Hero to delay melee foes. Now, Forgotten Arcanists will come in pairs from the West, East and South. Afterwards, a Siege Wurm will start to attack your party from the East. It is possible to kill the wurm after the Arcanists are dead and before the first melee group approaches, but you can simply heal your allies and ignore it.

At the five or six minute mark, more groups of Forgotten and a boss will approach the altar. Another pair of siege wurms will appear on the West, and then on the South. If you defeat the Forgotten, there will be no more groups attacking the altar, and you can use the remaining time to kill off the wurms. When the timer reaches zero and the ghostly hero is still alive, the mission will complete.

The mission itself is almost comically easy providing you've got the tools to deal with the Arcanists (i.e. interrupts) as the rest of the defence is spent doing more or less nothing - you can kill the wurms quickly if you have the right skills. The bonus is another matter.

You must protect the Ghostly Hero for 10 minutes, during which time:

Players consider this bonus to be one of the most difficult in the game: you have a limited amount of time (some of which must be spent unlocking the bonus area), you need to split your group to protect an Ally (threatened by increasing numbers of foes), and your party is limited to six characters.

During the final siege where you defend the Ghostly Hero, you must kill three bosses and their groups located south of the fortress without letting the hero die and before the ten minute timer hits zero. The first boss is to the south behind the drawbridge. The second and third bosses are in the building behind the first boss. As you kill each general, a small group of Forgotten spawn outside the southern temple and head directly towards the Ghostly Hero.

You will get credit for the bonus as long as you kill all three generals, even if the ghostly hero dies later (which would cause you to lose the mission).

Method one: Focus first on the mission[edit]

The simplest method is to focus first on eliminating the foes attacking the Hero before going for the bonus. Wait until the Forgotten Boss attacks from the west gate. If all goes well, you should have nearly five minutes in which to complete the bonus.

If you still need to complete the mission, stop the last group of reinforcements from reaching the Ghostly Hero as you return to the altar. When you arrive back at the Ghostly Hero, the Forgotten spawn that you left from the death of the second general will arrive. Even if left alone this group often has no time remaining to destroy the Ghostly Hero.

After clearing the Arcanists, you have some time before the Forgotten attack the altar again. Instead of attacking the siege wurms, head south to rush the generals. You will need extremely high damage output and a speed boost is nearly essential. Take out as many of the generals (and their reinforcements) as possible before heading back to the altar to defend the Ghostly Hero. You can give yourself some extra time by leaving a healer to protect your ally, e.g. a bonder or a spirit spammer.

If you are worried about the timing, killing even just one general during this pause is enormously helpful. Head back to the altar afterwards and then proceed as if you are using method one.

With heroes/henchmen, it's sometimes easiest to simply do the bonus, letting the Ghostly Hero die and then re-do the mission.

The Forgotten and Enchanted will resume attacking with around 6:05 minutes on the clock. The Ghostly Hero can endure the Siege Wurms and the first wave of Forgotten; he can't endure the rest of them. You need to be back at the Ghostly Hero at 4:50 to ensure his survival. You can get away with it at 4:30 if you (the player) have spells that can rapidly heal the Hero - a speed boost is necessary.

A spirit spammer can solo the bosses while the rest of the party stays back and defends the fort. The build should include a self-heal, e.g. Mend Body and Soul or Spirit Light. Set up the spirits, pull the boss groups one at a time, and repeat.

Alternatively, if you leave a Signet of Spirits hero with the Ghostly Hero, they will both survive until you come back in to visual range of the Hero. This allows you to charge the three bosses. 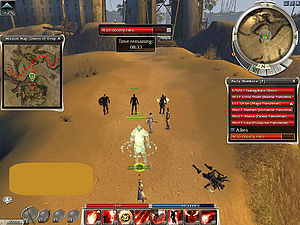 This method takes advantage of quirks in the game's mechanics, the first moves the Ghostly Hero to a safe spot after watching the mid-mission cinematic and the second is that the foes target the throne not the Ghostly Hero.

Killing all three members of Goss Aleessh's group will trigger a cutscene, where all allies including the Hero are teleported to where Aleessh originally patrols. Have your team utilize the slow totem to lure the last remaining member away from the bridge and enter the fortress. Once inside, before making the Ghostly Hero claim the altar, flag your H/H outside the fortress in preparation to kill Aleessh's team's remaining foe. Once the Hero begins to claim the altar and the timer begins, kill the remaining team member as quickly as possible before the enemies begin to surround the Ghostly Hero at the altar. Doing so will teleport the Ghostly Hero outside the fortress via the cutscene trick. Once outside the fortress, talk to the Hero to make him stay (safe spot). Now you have over nine minutes to complete the bonus while ensuring mission completion at the same time. The Ghostly Hero can remain alone and will be completely safe because the mission script sends the foes to the altar, not to the Hero.

You don't actually need the slow totem. One team member can lure Aleessh's entire team to one side letting the rest of the party sneak into the temple from the other. That team member with Spirits and Summon Spirits can lure and escape easily.

There are several points where the party should take special care:

Warning to Survivors: During the end scene you will see the swarm of Enchanted & Forgotten which has been completely avoided, those foes will still be attacking the party who "appear" to be invulnerable. But behind the cinematic the party actually gets wiped and still successfully marking the mission and bonus as completed and taken to Augury Rock.

Bug.If the Ghostly Hero dies after capturing the shrine but before the party manages to trigger the cutscene, and Goss dies at the same time or shortly after the party is wiped, the cutscene will still trigger. After the cutscene the party and the Hero will be resurrected, but the party leader will have a "return to outpost"-prompt. The party can still continue the mission as long as the prompt is not hit, and even the mission timer will keep counting. The bonus objective can even be completed as normal when using this approach, but once the timer hits zero, the mission itself will not complete. However, a Zaishen Mission will update for both normal and bonus objectives.

Each of these tricks can be used in combination with any of the methods above.

All of the techniques above work in hard mode, however there is less room for error.

Ghostly Hero: "Once my people came to the desert and built a great temple. But while we labored, we were set upon by the stewards of the desert, the Forgotten."
Ghostly Hero: "They killed my people, and now another ghost sits upon my throne. I beseech you, help me return to the temple. Help me reclaim my throne and my passage into the Hall of Heroes."

When the Ghostly Hero is commanded to stay.

Ghostly Hero: "I beg of you. Take me to my throne. The gods await me in the Hall of Heroes."

When the Ghostly Hero reaches the temple gate.

Ghostly Hero: "I can see the usurper there, in the middle of the Temple. We must defeat him before I can reclaim my throne."
Ghostly Hero: "Watch that no harm comes to me while I lower this bridge."

When the Enemy Ghostly Hero is defeated.

Ghostly Hero: "The Forgotten will come again. Hold them back while I cast a ritual and return the throne to my custody."
Ghostly Hero: "Peer down from the heavens, I beseech you. Grant us your gaze, oh gods of Tyria."
Ghostly Hero: "We have proven ourselves worthy. Grant us that which we seek."

Ghostly Hero: "We have drawn the attention of the gods. Let us hope they are pleased." 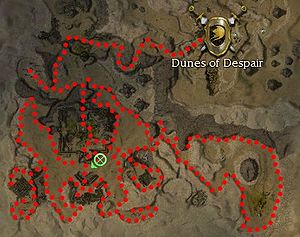 Explorable area reachable from the bonus.

Bug.The bridge will still fall if you talk to the Ghostly Hero before he uses Claim Resource at the start of the mission.

Bug.The third bridge leading to the altar will sometimes not lower even if the Ghostly Hero has used Claim Resource.

Bug.Occasionally the Ghostly Hero will become stuck while under attack by the first Siege Wurm, in which case he will not activate Claim Resource to lower the bridge and stops following the player. He won't continue onward until you slay the Siege Wurm on the other side.

Anomaly.It is possible to enter the buildings to the southwest and southeast of the Throne of Pellentia even when the bridges appear to be up.
Retrieved from "https://wiki.guildwars.com/index.php?title=Dunes_of_Despair&oldid=2678911"
Categories:
Hidden categories: