Evennia is free, and the treacherous Markis isn't far. Seek out the Seer to find how to infuse your armor to protect against the Mursaat's deadly Spectral Agony. Then track down Markis and avenge his treachery against the Shining Blade.

The goal of this mission is to kill Markis. To do so the players first have to meet with the Seer, who will offer to infuse players armor, to protect them against Spectral Agony.

Maximum-stat armor (e.g. from Droknar's Forge) is strongly advised for this mission, not only because it gives an edge in the fights, but also because infusion will only be applied to the armor set players are currently wearing. As you encounter the Mursaat throughout the game, you want to make sure that you are protected against their most deadly attack. Should you miss the opportunity, you will need to repeat the first part of the mission or alternatively infuse another set later in the game in Mineral Springs, or the Ring of Fire or Abaddon's Mouth missions.

Do not engage the Mursaat in combat until your armor is infused, or use an infused tank, such as any hero or pet (henchmen are not infused), to draw attacks away from the rest of the team.

At this point you will hear Shining Blade Scout Ryder calling out for help but safe from harm. She gives the bonus objective but her rescue is not needed to complete the mission. In any case, ignore her for the time being.

Cross another bridge and keep traveling north-west until you reach the snowfields populated by Azure Shadows. Kill them and proceed to the Seer (marked S on the map above).

Follow then the passage north of the Seer to reach Markis' location.

You can either immediately kill him and his Jade guards to complete the mission or ignore him for now and proceed south to do the bonus.

Talking to the Seer is actually not necessary for finishing the mission. Should players be already infused against Spectral Agony,it is more time efficient to go through the Mursaat stronghold at the start of the mission instead.

In this case, do not follow the river north, but follow Markis through the Mursaat stronghold - this path is marked in green and yellow on the map above. This path has the benefit of going via the bonus NPC Shining Blade Scout Ryder. 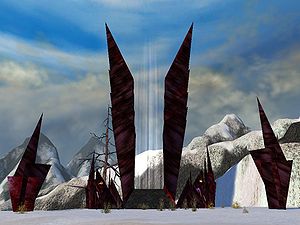 Shining Blade Scout Ryder urges players to kill The Inquisitor before it escapes with intelligence. Accepting the bonus will spawn the mentioned boss and a few Mursaat, which will move north towards the Mursaat teleporter.

Clear out the surrounding mobs between Ryder and the bridge before talking to Ryder to avoid over-aggro. Send only one player to Ryder while the rest of the party awaits at the Inquisitor spawn point (which is just outside the gates, a little up the hill).

Although the foes are notably tougher in hard mode, the basic strategies are the same.

When the party approaches:

"HELP! Please help me!"
"I'm trapped in here! There are corpses everywhere!"

If attacked by foes:

Talking to a player:

"When I got caught, a Mursaat called The Inquisitor interrogated me. He just took my thoughts from my head."
"I...I...He found out we were heading to Thunderhead Keep to help the Dwarves. Please catch him!"
Markis
"So you finally figured it out, eh? Now you've come to extract vengeance?"
"I should have killed you in the Maguuma Jungle."
"I'm going to enjoy killing you almost as much as I enjoyed watching Saidra die."

For more information, see Iron Mines of Moladune (cinematics)
Seer: Yes, yes. You are the Ascended ones the dragon Glint has spoken of. Come in. Come in. I have been expecting you.
<Party leader>: Who are you?
Seer: I have traveled far and waited many long years to help you fulfill the Flameseeker Prophecies. What matters is that I am here to help you.
<Party leader>: We're listening.
Seer: By now you have realized that the Mursaat cannot be defeated with the tools you now posses.
<Party leader>: Yes. Go on.
Seer: For centuries my kind has fought the Mursaat. I know the rituals that can give you at least some protection from their agonizing touch.
<Party leader>: And you will perform these rituals for us?
Seer: Yes.
<Party leader>: But why? Why help us?
Seer: Because if the prophecies are to be believed, you will do what my entire race could not. You are going to destroy the Mursaat.
<Party leader>: What would you have us do?
Seer: In a cave to the east lives a bestial creature made from malice and shade. This creature has a natural defense against the magics of the Mursaat. Bring me the spectral essence of this beast, and I will infuse its protections into your armor.

Evennia: "May the deaths of all whom you betrayed weigh heavy on you in the afterlife. Death is too good for you, Markis. May your tortured soul never find peace."
Brechnar Ironhammer: "Brother, the portcullis has been breached. The first and second regiments have fallen, and the Stone Summit has raised their flag over Thunderhead Keep. My king, the fortress is taken."
King Jalis Ironhammer: "Sound the horn of retreat, Brechnar. We will cut our losses and regroup."
Brechnar Ironhammer: "Get yourself to safety, brother. Deldrimor cannot afford to lose its capital and its king in the same day."
King Jalis Ironhammer: "Guards, with me. We are leaving."

Bug.Sometimes, Markis will get stuck in a chest and will not arrive to the fortress. Players will have to backtrack his route from the original spawning location to find him.