A banner found in Stone Summit camps in Eye of the North.

The Stone Summit are a guild of xenophobic dwarves who live high in the Shiverpeak Mountains. Their hatred of other cultures (particularly humans) runs so deep that they won’t even deal with other dwarf clans who have trading relationships with the human nations.

The Stone Summit pride themselves on their fanaticism. To them, there is only one right way to do things—their way. There is only one group worthy of ruling the world—the Stone Summit. All other life is meaningless. They are cruel, brutal, calculating, and cold hearted to a degree rarely seen in civilized nations. A Stone Summit dwarf could split a man’s head without a thought and feel as little concern as if he had just stepped on an earthworm.

The Stone Summit leader, Dagnar Stonesplitter, [sic] aspires to one day rule all of Tyria. His methods are messy but effective. The price he extracts for failure is death, which tends to put a hard edge on everything.

Those dwarves who have managed to survive inside the guild for any significant period of time are as tough as stone and just as cold. They execute their orders with a brutal efficiency, knowing that they must succeed or die.

The Stone Summit have a penchant for slavery. They can often be found riding giants and other beasts bound with all manner of manacles and restraining devices. They don't bother to tame their mounts, rather preferring to simply chain the beasts and overpower them, making them bend to their will rather than becoming accustomed to their new role. If given the opportunity, they would enslave humans and other, "non-pure" dwarves as well.

The Stone Summit is a xenophobic faction which has recently broken away from the Deldrimor dwarves while being led by Dagnar Stonepate. They have had some recent successes in seizing power and resources from the Deldrimor dwarves, most notably in claiming the vast mine of Sorrow's Furnace, which became their main base. They utilize Ice Golems and Siege Ice Golems which are created via the Heart of Ice in their war. They also have enslaved the Dredge among other creatures, such as the snow beasts, Dolyaks, Giants, and even Djinn.

Spoiler alert: The following text contains spoilers relating to the story of Prophecies, Sorrow's Furnace, and Eye of the North.

After the death of the Dagnar Stonepate and the destruction of the Iron Forgeman in Sorrow's Furnace, the Stone Summit fled to the north and the Deldrimor declared victory of the civil war; however, the Stone Summit were not content with their loss and, having rallied under Duncan the Black, they have sought various ancient powers in the Far Shiverpeaks ranging from Zoldark the Unholy, Lord Glacius the Eternal, unknown relics in the Darkrime Delves, and eventually trying to absorb the power of the fallen Great Destroyer.

After the death of Duncan, who is said to be the last Hierophant of the Stone Summit, it is unknown what happened to them. 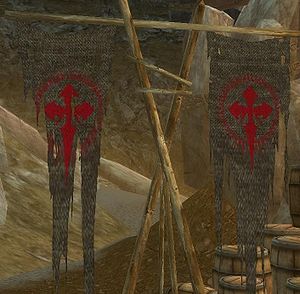 A banner found in Stone Summit camps in Prophecies.