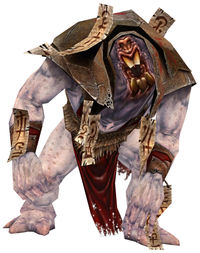 On the northern continent of Tyria, the mole-people known as the Dredge are a pitiable race, enslaved by the wicked Stone Summit dwarves and ready to fight alongside any who will help free them from their masters’ whips. In the Echovald Forest of Cantha, a few small colonies of escaped Dredge jealously defend their prized freedom. The offspring of a few desperate escapees from the Shiverpeaks who tunneled for hundreds of miles to reach their strange new home, these Dredge have no reason to feel any friendship toward humans or anyone else—they escaped slavery on their own, and plan to establish their race anew in the petrified woodlands.

Dredge villages are marked by large dirt mounds. The mole-people live primarily in the tunnel networks linking the mounds together. Those who underestimate the ferocity and aggressiveness of the Canthan Dredge do so at their peril.