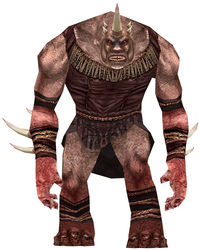 Giants are grotesquely formed humanoids that are larger than humans. They are sentient, but communicate using primitive language skills. They are found using just three professions: warriors, rangers, or necromancers. All Giants appear to have horns protruding from either their jaw, forehead, or the top of their skull.

Every giant has Giant Stomp and, except for those found in The Desolation, all have immunity to knock down. Some giants can cause knock down on critical hits.

Weapons that deal extra damage to giants include: The Long Sword crafted by Grahame and any weapon with an of Giantslaying upgrade.