Any character can simply walk into the outpost from Stingray Strand and start the mission. Completing Riverside Province also brings the party here.

Deliver the Scepter of Orr to Vizier Khilbron and rendezvous with Evennia on the other side of the island.

Talk to Evennia and get the Scepter of Orr. Holding it grants +1 energy regeneration, and when dropped it increases the maximum energy of nearby allies by 10.

Head south past the Inferno Imps onto the beach with Lightning Drakes, then follow the river north. There are undead patrols at the bridge; consider pulling the mobs apart for safety.

Cross the poisonous swamp with the Bone Dragons and find a gate lever - pull it once to open the gate. Continue up the hill to meet Vizier Khilbron (point A), and a cinematic will trigger. He will summon undead allies to aid the party. The party leader can talk to the Smoke Phantoms so that they follow the party, instead of running off on their own (and soon thereafter die to the White Mantle).

Escape to the eastern shore defeating the White Mantle on the way. Find the docks (point B) and the Vizier will appear again. Protect the Vizier while he summons a ship. White Mantle groups will then approach from both sides. Finish each group before the next wave comes or the party may be overwhelmed. When the boat appears, any one player boarding it will end the mission. Sending heroes or henchmen onto it will not end the mission. 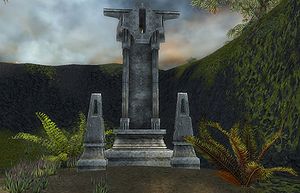 The bonus requires that the party escorts a Restless Spirit to his final resting place. Although it is invulnerable to damage, the bonus can be tricky because (a) the spirit can get stuck on fixed objects or body blocked by allied spirits or minions, (b) it changes its following mechanic midway through the mission, (c) it lags behind the party, and (d) it is not necessarily affected by party-wide speed boosts.

The spirit can be found after getting past the Fire Imps, at the end of the Lightning Drake beach (point 1). Have the scepter-bearer speak to it once and it will follow the scepter around, depending on who is carrying it. Once the party reaches the lever of the fort where the Vizier awaits, make sure that the spirit follows inside (and is not lagging behind); after the Vizier takes the scepter the cinematic is triggered, the gate will be locked, and the spirit will be stuck outside (preventing completion of the bonus).

After talking to Khilbron, speak to the spirit again so that it begins following the party. Without the scepter, the spirit will usually follow the nearest player, but (as with any ally or follower), it might instead move towards the nearest player in motion (and within compass range). Keep an eye on the spirit at all times to make sure it remains close to the party.

The bonus only requires a slight detour from the docks to reach the cemetery (point 2), which can be done by hugging the cliffs. The event will not trigger until you get close to the docks. Alternatively, head for the docks first, defend the Vizier and exterminate all opponents and then lead the spirit to its resting place before getting on the boat.

When talking to the Restless Spirit the first time.

When talking to the Restless Spirit again.

Restless Spirit: "Take me to the Vizier."

When talking to Vizier Khilbron with Scepter in your hands.

Vizier Khilbron: "Ah, the Scepter of Orr. Many thanks."

When talking to Vizier Khilbron without Scepter.

Vizier Khilbron: "Where is the Scepter of Orr?"

When talking to the Restless Spirit the first time.

When talking to the Restless Spirit again.

Restless Spirit: "So many years of pain..."

Vizier Khilbron: "There are far too many Mantle here for this to be a coincidence. I fear we've been set up."

Vizier Khilbron: "It is as I feared. Councilor Markis must be the one who set us up. You will not be safe if you try to return to the mainland."

Vizier Khilbron: "Our only chance is to make for the coast of the Crystal Desert. To the dock!"

After leading the Restless Spirit to his grave.

When reaching the dock.

Vizier Khilbron: "This ritual takes my full concentration. Keep the White Mantle off my back, and we will make it out of here safely."

When Vizier Khilbron finishes the ritual.

Vizier Khilbron: "Hurry! On to the boat! We must make our escape!"

Vizier Khilbron: "On the boat. Hurry. We must make our escape."

Later, on the boat.

Anomaly.Even before the first cinematic, Vizier Khilbron holds the Scepter of Orr despite the fact that it was not yet given to him.

Bug.When pulled away from the pier in their final location, the White Mantle from the south side of the docks can run off in a straight line away from the pier and get stuck on the first obstacle they run into. These foes will not return to the pier afterwards, but will still attack any opponent that enters their range.