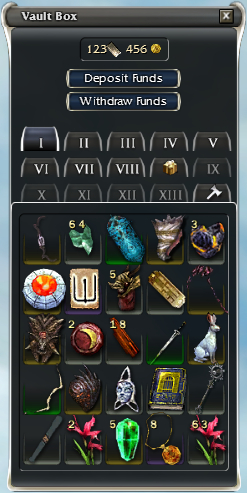 Example of an item storage tab of a Vault box.

The Vault box (colloquial: Xunlai Storage Account) is the inventory repository service offered by the Xunlai Guild. The vault is shared by all characters on the account. Unlimited access to storage costs 50

for roleplaying characters and is free for PvP-only characters (once the vault is unlocked for the account).

You can open the box by speaking with a Xunlai Agent or directly with a Xunlai Chest. There is no access in pre-Searing Ascalon, since neither of these NPCs appear in that part of Prophecies. 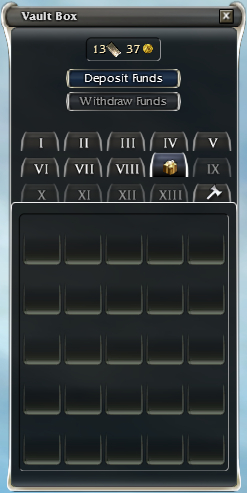 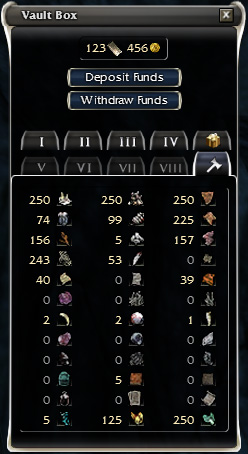 Example of the materials storage tab of a Vault box.

The Vault box contains up to fourteen tabs (or panes) of storage space, each with 25 slots for items. As with your backpack, items that cannot be stacked will take up one slot each.

You can expand your item storage as follows:

Material storage is an optional in-game upgrade to the Vault box; each PvE character must pay the 50

fee to be able to use it. As noted above, by default, the material pane holds up to 250 of each type of crafting material; any surplus will take up a separate slot in the ordinary storage (or the character's inventory).

As with ordinary storage, PvP characters do not have to pay a fee, but cannot gain access unless that tab is unlocked by a PvE character.

Material storage can be expanded up to a maximum of 2500 of each type by purchasing Xunlai Material Storage Expansions in the Guild Wars Online Store.