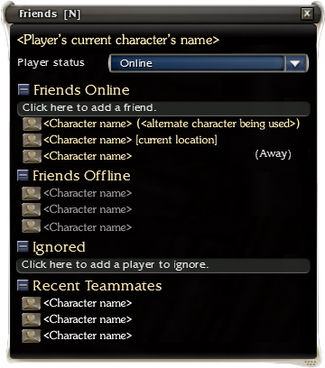 The Friends List is a user interface panel that allows you to track the in-game location and status of mutual friends and to see your recent teammates and trade partners. You can also use it to ignore certain accounts. You can toggle its appearance through the in-game menu or using a keyboard shortcut (default key: [N]).

The player status drop-down list at the the top of the panel determines how your account is displayed in the Friends list (of other accounts) and Guild Menu:

If someone you friended is logged in with another character on the same account, that character's name will be displayed in parentheses next to the character name you initially added.

If someone on your Friends list has also added you to their list, their current location will be displayed in [brackets] next to their name. If their name, alternate character name and location doesn't fit then you can enlarge window by dragging the bottom right corner of the Friends list window.

Players that you have added to your Friends list, but who are either offline or appearing offline, are displayed here in grey font.

The Ignored list allows you to identify accounts from whom you do not wish to hear. Adding a character name to your ignore list blocks all messages from that character's account, and prevents their text from appearing in your chat windows. No status will be displayed for these accounts, and no other character names will be displayed. The ignore list can hold a maximum of 20 names and uses white font.

You appear to ignored accounts as if you are offline. Attempting to message a character who has ignored you will produce the message "Player <character name> is ignoring you."

The Recent Teammates list displays players that played with in your party since you logged on; this list resets on logging out, white font as well.

The Recent Trade Partners list displays players with which you have traded via the trade window since you logged on; this list resets on logging out, white font as well.

Bug.The mutual Friends list does not always update correctly for accounts with a status of Do not disturb; this can be fixed by toggling the status to Online and back.

Bug.Under certain circumstances, the mutual Friends list does not show any location for a mutual friend (as if the friends status was not reciprocal).

Bug.Banned accounts cannot be removed from Friends/Ignored lists. Attempting to remove a banned account from the list will trigger the "district full" error sound with no error message.