Hair, and Indeed, Everything Stylist 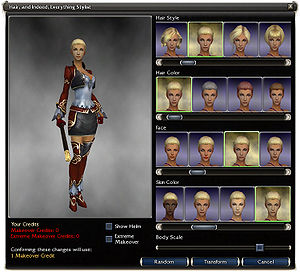 Hair, and Indeed, Everything Stylist panel

The Hair, and Indeed, Everything Stylist panel is part of the user interface appearing after interacting with Anatomical Engineer Llye. It allows for the customization of a character's physical appearance by spending Makeover Credits or Extreme Makeover Credits. Unlike when creating a character through the character selection screen, the hair styles, hair color, skin color and face can be interchanged between all three campaigns opening up a large number of possible combinations.

Your character can be customized in a number of ways:

All changes to appearances will be automatically displayed in the preview box on the left. No changes will be made until you have confirmed the changes in after pressing the "Transform" button.

To change the sex of the character, check the "Extreme Makeover" box. Your character's gender will change, along with any armor being worn, and you may continue to modify your character's appearance.

One Makeover Credit will allow the change of a character's body scale, face, hair color, hair style and skin color. Players can change one or all five traits for the one credit.

One Extreme Makeover Credit will allow the change of a character's sex, body scale, face, hair color, hair style and skin color. Players can change one or all six traits for the one credit.